Fresh from the Camden and Dublin Fringe Festival, Joe Wright's piece soars to the stars...

I love arriving at the theatre and having absolutely no idea where my ticket will take me.

Joe Wright has written ‘Astronaut’, a one-man spoken word piece capturing the 2016 Apollo House occupation. The play takes us back in time to the empty government owned building in the heart of Dublin, now occupied by the Home Sweet Home Campaign group. They raise their voices about the rising homelessness in Ireland, which soon sparks national interest, with celebrities and media moguls showing their support. Donations fly in and many thousands march the streets. After twenty eight days, the activists are taken to court and ordered to vacate. They do so with the agreement being that more social housing will be built to end homelessness. Their agreement was broken within a month of the movement.

This inspired Wright to write about the situation, bringing us ‘Astronaut’. The piece flicks between Wright’s childhood and adulthood. His former years chart a young boy, incited with a big imagination, as his father tells him stories of the Apollo moon landings and how the stars are almost touchable. Little does he know that his Ma soon follows the stars and his Pa slowly follows her… As a homeless adult, his nameless and ignored presence was no different to the homeless people sleeping not too far away from the theatre.

Wright has a knack for multi-rolling, with each character so vividly drawn for his audience to savour; including ‘that nice lady Susan’, a incandescently cheery social worker lady and a few other beady civil servants. What was quite clever was how nonchalant everything felt. Emotion wasn’t forced, rhyme wasn’t glaringly obvious and music wasn’t even needed. Wright has an innate musicality about him, which really comes alive with the text in ‘Astronaut’. The text is a bit of a dance which weaves itself between lyricism and stereotypical Irish grit. It’s almost slightly haunting at times, with Wright’s confidence to forthrightly question the audience. Additionally, the timing of it being one of the coldest weeks of the year made the piece ten times more poignant than I thought it was going to be. It’s almost quite funny how in the 21st century that we are failing to take care of the most at-risk groups in society. A joke that Wright plays upon, with the audience releasing stifled chuckles as they know that it shouldn’t be so difficult to resolve.

The set and lighting have been working in tune to channel the sights a homeless person sees. Again, nothing too flashy or elaborate has been used and the final effect is still extremely effective and watchable. I would recommend ‘Astronaut’ to anyone who wants to leave the theatre with more questions than answers. 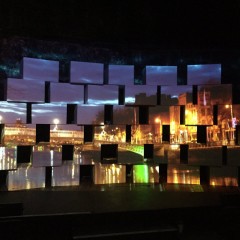 Fresh from the Camden and Dublin Fringe Festival, Joe Wright's piece soars to the stars...