A KitKat that caused all the trouble!

On the 2nd of February I have never been as spooked, after viewing a nostalgic 1980's autobiographical absurd comedy, which made all ages of the audience laugh. Held at the Peace Memorial Hall, in Shrewsbury and that really fitted with the theme of searching for George, the beloved ghost, due to the building having that abandoned look. For £8 to £10, it was a class act, with it being about Gareth and Phil preparing for the show 'I ain't afraid of no ghosts', but was mainly about the search for George, which touched the heart of Gareth throughout his childhood.

As I entered the community it felt like a retro location for a retro show, with sitting around tables, which didn’t really have a purpose, making it feel more cosy and a community. The setting was nostalgic, with a simplistic layout, with shelves containing 1980’s memorabilia, like: Rubix Cube and a Fame vinyl. The lighting were on stands, which changed between moods and different situations. An example was when the fireworks hit the streets and the traumatic scene for Gareth. These were timed well and worked well by Phil. Fairy lights were put around the bar area and entrance, to make it feel welcoming. The venue fit the whole audience in, which ranged in ages – including children, who were dancing to 80’s bangers within the intervals.

The acting was phenomenal, even though it was confusing whether Gareth was playing a little Gareth, the character or just him. Phil was such a great impersonator, with him playing multiple roles producing absurd comedy. He not only played multiple characters but he had to change costumes quite a lot, under time and under such a small, but deep stage and he did that amazingly. The costumes were so simplistic, which made it even more effective. The use of method acting really portrayed their acting to the best ability. Ghost Busters being the main influence for his experimentations.

I personally really enjoyed the whole performance, considering I have never been to an event like that before, it was the most comfortable and best theatrical experience I’ve viewed, especially under the pressure and size that it was all performed in. As a second order performance (with not being born in the 80's, I know the 80's well, through other shows), it was sensational, knowing all the songs they were playing. I loved how they were sticking to the theme throughout the whole show, even playing television adverts on the screen in the interval and even interacting with the audience.

Overall, the sitcom-like performance was amazing - with the seance Girls World styling head scene - playing the role of the sister and I liked how they referenced the show in the show, as it is a rural touring and it was the journey through the life of theatre, after saying: "It's basic but it fits in the back of a Ford Focus." If you are feeling morbid, go and see this nostalgic trip to get your spirit up. After all you would want a happy atmosphere and to show ‘I ain’t afraid of no ghosts'! 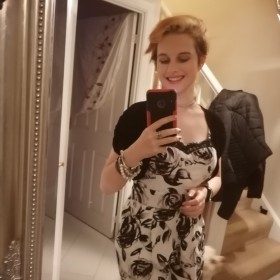 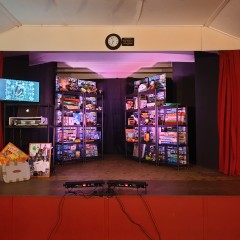 I ain't afraid of no ghosts!

A KitKat that caused all the trouble!