'A different set of rules depending on what you look like'

Cosily nestled under the hussle and bustle of Waterloo station is the magical VAULT Festival underworld. As I take my seat for ‘I Stopped… When’ I’m taken aback by how intimate the layout of the stage is, with us audience members feeling at one with the drama to entertain us for the next hour.

‘I Stopped… .When.’ is the creation of artist Nicole Acquah’s fresh company Acquah&Co, with Acquah herself working both on and off stage as a performer, writer and producer.

The piece begins with our zany MC of the evening, MC Chris Sparks (Joseph Cullen) bouncing (a little bit unsteadily) onto the stage. Accompanied by a backdrop of pop music and kooky lights; the audience are treated to an almost London Comedy Club set-up with the glamour of The X-Factor competition world. Cullen makes the perfect MC, eccentrically wild yet still aware he has to maintain some form of professionalism in the workplace. The audience are even allowed to participate in a few chants to really build the excitement for the contestants of this ‘Poetry SLAM’ tournament.

Three finalists are tasked with performing three pieces of spoken word poetry according to three themes. We meet shy foreign-student Wren (Tom Nguyen), naïve and good-natured schoolgirl Adele (not that one, played by Lauren La Rocque) and the obnoxious celebrity Naya (Nicole Acquah). I feel that the content of the pieces become drastically more controversial as the heat of the competition intensifies, with Wren’s poems emphasising his position in London as an outsider foreign student to Naya’s more radical political pieces where she openly criticises the audience and judges. Acquah’s performance is highly touching as she fearlessly makes statements one feels one ought not to say. I even felt myself shudder at one line in particular, ‘A language I was forced to learn’. La Rocque’s demeanour of a seventeen year old on the cusp of innocence and adolescence places her in a pickle situation. She has tackled her role with great conviction, a young girl piqued with indecisiveness as to what she feels is right versus a lack of confidence in defending herself. You can clearly see how her naivety plagues her; she delivers her speeches with a real sense of struggle as she tries to navigate her contrasting thoughts. She states, ‘when your white boyfriend asks you really nicely to be his slave’, which is again something a British audience cannot really comprehend, but she asks this question in deep contemplation. I did feel empathy for her situation as the play went on.

This is of course quite a text-heavy piece, but all text was thoughtful and impeccably written. At times, I felt the articulation was a little weak, as the actors battled against the overhead sounds of traffic and trains. The music too was also a little strong against the dialogue, particularly during the dressing room scenes.

Scenes dip in and out of the antics on stage versus the antics in the dressing room. These share a few secrets and spoilers, but more importantly give the audience a source as to where the onstage performance originates from. Above all, these unfiltered snippets of drama are where the tension really builds within several relationships shared within the piece. Prose loses its structure and the characters unwind with a little bit of cheese added in.

Overall, ‘I Stopped… .When.’ did indeed make me stop a few times to comprehend some of the wild thoughts exposed quite comfortably through couplets. With impressive performances tied together with thought-provoking ideas, it’s a winning combination which is at home within the unconventional Vaults environment. A few articulation complications did hinder the momentum at times which is why this scoring is as it stands. 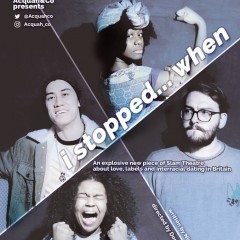 'A different set of rules depending on what you look like'