Of course, every five year old needs to scream "we want Dick!"

I went to theatre Clywyd on the 13th of January. The set is bright. the music is loud. the air is electric. the theatre is large, with plush seats. Me and my brother are nearly front centre. We can see everything. We've got our ice cream vouchers, tickets have been inspected, everyone is trying to talk above the noise.

We've been waiting a while now. Some of the audience is getting impatient.  The cast starts dancing and waving in costumes. This seems to cheer people up a bit. I think we're still waiting for some of the audience to arrive. I still haven't seen the dame. The music quiets. One of the cast has injured their leg. Alice. it doesn't seem to hamper her throughout the first half. Or the second.

The show begins. The dame enters, with pink hair and the largest stuffed breasts I've ever seen. Of course, "Dick" Whittington is ripe for sexual innuendo. Who wouldn't want their child screaming "we want Dick!" at the stage? Totally innocent of course. And there's the requisite interrupting of sentences with the word "Dick". The dame's got a cucumber in hand. And he's yelling for Dick at the top of his voice.

All the cast play multiple instruments. there's piano, and saxophone,drums, and electric guitars. And it's really loud. Perhaps too loud in parts. I couldn't hear the singing over the other instruments. But what I heard of the singing was also very good. There were singing puppets too, voiced by the cast.And Dick Whittington's cat did acrobatics! And of course, the pantomime being in Mold, Wrexham's always the butt of the jokes. The cast were smiling and laughing even when stood to the side of the stage on the instruments. They genuinely looked like they were enjoying themselves. The audience loved it. The cast sang pop songs throughout, including "living la Vida loca" and "get your Sunday  shoes on". The costumes, particularly the dame's were brilliant. He had a Great British Bake off apron which attached to his cake breasts. Beneath his cake breasts was a massive cupcake which he collapsed into and crept off awkwardly whenever Dick was talking to the girl of his dreams. The makeup was good. Most of the cast had a few sparkles and some eyeliner. The dame looked like he'd come from the set of "the only way is Essex".The Wrexham version of course.

Bubbles and snow  came from the ceiling, along with the cast spraying the audience with water guns. The pantomime was a bit random in places, but it followed a plot generally. I think the last 10 minutes of announcing birthdays dragged a little, but other than that, the pantomime was one of the best ones I've ever been to, with all the bad jokes and sexual innuendo one could ever need. 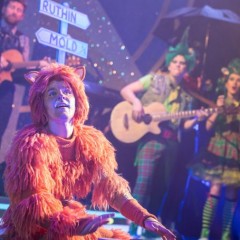 Of course, every five year old needs to scream "we want Dick!"