Strikingly powerful statement on the result of abuse and neglect.
Highlights disability's representation of innocence and care.

Director Joe Stephenson adapted Freddie Machin’s play by Chris New, which centres on a teenager with learning difficulties (Richard, 15) who communicates more easily with animals – both dead and alive – than with people. Richard is living in a caravan with his violent brother Polly, Richard befriends Annabell, whose family moved in to the land they live on. Richard and Polly face many difficulties throughout the motion picture which in turn has negative effects their brotherly relationship. Polly prepares to leave and a powerful scene reveals family secrets that tear the two apart. Annabell is left to take responsibility and care for the innocent Richard.

Chicken is a heartbreakingly beautiful film combining natural beauty and societal disorder. Richard's performance has precision, his slightly skewed physical movements and scattershot speech creates a childlike portrait that is neither patronising nor unconvincing, rather innocent, allowing Richard to become a character with a complex emotional life that the audience emphasis with and learn to love regardless of his disability.With his brother too busy either working or drinking to really spend much quality time with him, Richard creates his own little world including talking to his chicken and only friend Fiona. Likewise, Annabell emits charm and likeability but also an emotional complexity that comes into light once she becomes irresistibly invested in Richard’s life, offering him a place to stay and taking care of him regardless of the plight he has encountered in his life.

The film demonstrates class struggle, and the marginalisation of those from fractured families. Chicken looks at how those on society’s periphery get to where they are and deals with issues of childhood abuse and the mental result of neglect and violence. 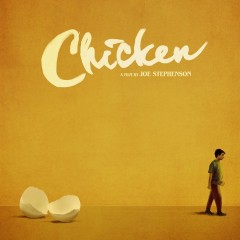 Strikingly powerful statement on the result of abuse and neglect.
Highlights disability's representation of innocence and care.