Having successfully toured both the Edinburgh Fringe festival and other theatres with previous piece ‘Artificial’, Split Note Theatre return with ‘Jailbirds’. Written and directed by Luke Culloty, the piece breathes life into an established story with its own eerie flavour.

Set in a deep underground prison called ‘The Box’, this piece aims to make the audience reconsider their perceptions of authority and control. Protagonists Moira and Bheur are tasked with conducting an assessment on the mental well-being of threatening serial killer Heath. The fact that they have five days to realise that a killer openly enjoys killing others didn’t quite add up in my mind, with reasons for the assessment feeling very top secret; we as the audience didn’t dispute this. With a futuristic play such as this, the point is almost to pose more questions than provide answers. A clear example of this is the background hums of birds outside. Are we really deep underground if we can hear other life outside?

With the opening techno beat droning on; it wasn’t long before I suspended reality and entered a peculiar world, very contrary to our own.

Culloty’s writing is indeed emphatic, and guides through the twists and turns of the plot terrifically. This is often very literal, as Culloty himself makes appearances on stage to ‘control’ the actors. I must make note that this is not a light watch at all.

However, despite dialogue being descriptive in nature; the full power of the words was lost by unclear projection of the cast. I wasn’t seated too far away from the action, so this was quite disheartening. Nonetheless, the piece was moving at times and excitingly paced at others, so with further development the piece will exceed all expectations.

For now though it is a solid working draft, slightly under-rehearsed and with plenty of room for improvement. Fight scenes were quite safely played, without the level of danger desired for such an underhand world with its dangerous villain.

Overall, the piece felt intriguing and very current, as it did make us ponder our reliance on artificial intelligence. However, it hasn’t struck the right chord with me for now. With more time, this will really be an eye-opening wonder.

Jailbirds is currently on at the Etcetera Theatre until the 8th December 2018. Tickets can be purchased here. 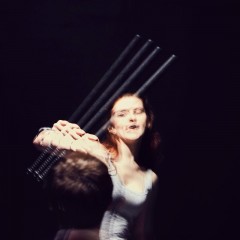 ‘Jailbirds’ by Split Note Theatre at the Etcetera Theatre

Having successfully toured both the Edinburgh Fringe festival and other theatres with previous piece ‘Artificial’, Split Note Theatre return with ‘Jailbirds’. Written and directed by Luke Culloty, the piece breathes life into an established story with its own eerie flavour.