I really enjoyed going to see the ‘Railway Children’ in the Old Vic Theatre School. The story line is about some children who are rich and live in town, then their father is called away unexpectedly. They have to move to the countryside and then they become poor, but they made the best of it. They had lots of adventures and they were very brave and saved lots people from a train accident. Really skilled actors brought the story to life. There was not a very big cast so the actors had to play more than one part but you could see that they were playing different parts by the way they acted. Surprisingly there was only two parts to the stage, the back drop and a bridge. Awesomely, the bridge was used as a tunnel, stairs in their home and a hill. My favourite part of the show was the props, although they were simple the actors used them in a very creative and clever way. The trains were just three windows being carried by actors with third, second and first class painted on them; the actors moved the windows in perfect time to the sound effects, lots of smoke, and lights made it seem so real. Inside their house the actors would hold up taps or coat pegs, so we knew we were in their home. The doorways of the houses were only a plank of wood held up by the actors. Watching the Railway Children in the Old Vic Theatre School was very enjoyable.

My name is Sophie and I am doing my bronze arts awards. I like dancing, being creative and rabbits. 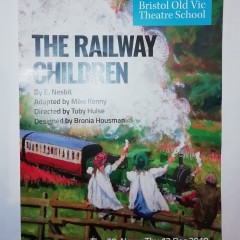