A review of the internationally-acclaimed 'Curious Incident of the Dog in the Night-time'; returning to the West End today!

Struggling under the strenuous weight of a best-selling novel, most adaptations are fated to disappoint. However, the National Theatre’s adaptation of The Curious Incident of the Dog in the Night-time not only exceeds expectations, but actively breathes a new dimension into the acclaimed novel. While the plot strictly sails to Mark Haddon’s original course, the pace of the text is transformed. The play ingeniously unravels the captivating tale of fifteen year old, Christopher Boone. A child with behavioural issues, Christopher becomes fixated on solving the mystery of the murder of his neighbour’s dog, revealing family conflicts and deceptions in the process. The “incident” of the title, however, is “curious” only because of its capacity to quickly become immaterial. Indeed, the true “curiosity” of the play is Christopher’s self-development. Not only are the audience invited to explore his subjective views, but we are also encouraged to question our own.

Using the versatile set of a plain black box, the stage is revealed to have as many hidden capabilities as the protagonist himself. As the house lights go down we are pulled into Christopher’s remarkable world, with the innovative lighting, sound and set design focusing our attention on his unique perception of life. A sensory feast develops over the course of the play. The projections and sounds overlap, blaring an information overload at the audience. Accompanied by flashing strobes and Christopher’s raw breakdowns, the audience are forced to see the world through his eyes. It is not a comfortable production to watch, but the technology does not diminish the emotions on display. Instead, the time-dilating movement sequences are used to offer a gentle relief from the hectic action.

These immersive movement sequences explore Christopher’s logical but emotionally immature mind, allowing room for the characters to grow in ways which plain dialogue could never support. Crucially, the subject of mental health is treated with the sensitivity it deserves. The audience are easily able to identify with and understand Christopher, on an emotional level if not a medical one. Most importantly, it is never said directly that he is autistic. Instead, the production focuses on his aspirations and successes, suggesting that it is understanding, and not pity, which leads us to recognise bravery in whatever form it takes, and to fight against our own limitations in order to achieve. 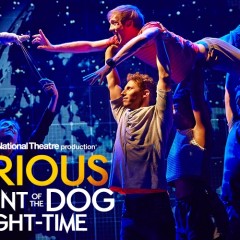 The Curious Incident of a Drama Student in Theatreland

A review of the internationally-acclaimed 'Curious Incident of the Dog in the Night-time'; returning to the West End today!