I saw an exhibition of eight paintings by Raqib Shaw and and two of the paintings by the Old Masters he was inspired by, next to his reimagining. There was also some of the tools he used such as porcupine quills, examples of his colour mixing and the paints he used in a display cabinet.

I went because it looked interesting and I had watched an episode of What Do Artists Do All Day about Raqib Shaw that was on BBC iPlayer. I would recommend seeing the programme even if you aren't attending the event. The exhibition was part of the Edinburgh Art Festival.

Raqib Shaw creates large scale works which are inspired by the Old Masters but differ in that they are almost dreamlike in their quality such as characters have hyena heads or are blue, and something I found interesting was that he is in most of his paintings in one way or another ether as the main being or a side character. He also references old myths a lot in his work.

When I first walked in the two things I noticed most were how big the paintings were and how colourful. It was quite a small area so they really filled up the room. I realised how detailed they were. I also recognised one from the documentary which interesting because I had seen the process.

Did you find anything particularly interesting to your personally?

Two of the works that inspired him belong to the the SNG so they were on show next to their counterpart and I used a phone to look up the other original paintings which he was inspired by. It was cool seeing them side by side and  seeing the similarities and differences. This is a photo with the artist standing between one of his paintings and its inspiration.

What did you learn? Did it make you think about any art form differently

It was interesting seeing how all Shaw’s paintings usually have little details that they share but are still very unique. So that would make me look more carefully at works by other artists to see what might be similar and what might be different. Also I enjoyed learning about how his works were influenced by his culture and background, because the exhibition had information to read about him.

Yes I did enjoy it because his paintings are very unique and beautiful. I also really like the stories behind them and how vibrant his paintings are but also dark at the same time. Being able to see his work and the Old Masters side by side definitely added to my experience of the exhibition. 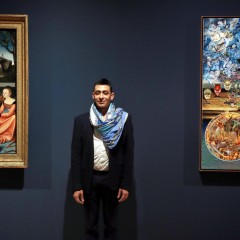 Raqib Shaw: Reinventing The Old Masters at the Scottish National Gallery of Modern Art (Modern One)

I saw an exhibition of eight paintings by Raqib Shaw and and two of the paintings by the Old Masters he was inspired by, next to his reimagining. There was also some of the tools he used such as porcupine quills, examples of his colour mixing and the paints he used in a display cabinet. 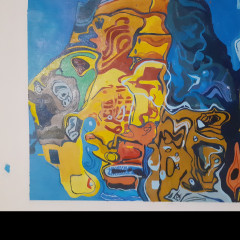