Following a tour across Bedford, Durham and Birmingham – Fourth Wall Theatre Company in collaboration with Lion Theatre Company has landed in London with Ella Hickson’s ‘Boys’. Despite it being an ‘Amateur rights’ production, amateurs are nowhere in sight within this gem.

Stuck in the tricky adolescent stage between growing up or remaining forever young, we are greeted by the class of 2011 – Benny, Mack, Timp and Cam. None of them want the summer to end, but they are all due to graduate soon, or so we are led to believe. Throw in a few girls, dry pasta, Disney tunes, sambucas and a lot of dirty washing-up and you seem to have the cosmopolitan life of a male student. A more prolonged episode of ‘The Inbetweeners’, but set in Edinburgh and without Will’s Mum.

Particular praise is to be bestowed upon the production team, whose careful attention to detail was applied throughout the whole production, successfully working to authenticate the piece and bring this world to life. Scene transitions were as silky smooth as a Pot Noodle and the playlist added the right kind of upbeat dynamic energy. The fact that no characters wish to clean up or remove the rubbish on stage is provoking, as they have made the set their true home. It’s almost as if the rubbish on stage is a metaphor for growing up, and removing the rubbish will signify the end of their carefree, irresponsible era.

The cast sizzle on stage, engaging in the right kind of debauchery, alongside bringing the naturalistic tones required to make the dramatic scenes a bit more emotionally demanding for the audience. The cast also have the challenging task of embracing all of the complexities of youth culture, with often multiple gossip or situations happening on stage at once. Directors Hetty Hodgson and Alice Clarke excel in a difficult task of making sure all of these many encounters are not happening at once and are digestible for an audience.

Angharad Phillips embraces Sophie’s monologue about ‘Guilt’ sensitively, making it a real highlight of the piece. Benny (John Broadhead) is our omniscient narrator, relatable and candid he really is a vehicle for the audience to look through. My one criticism was that when tackling an accent foreign to ones own, the actors may need to over-articulate a little bit more on stage. There were times when the accent was deeply unclear to myself, especially when the stakes became quite higher and the dialogue became all the more important.

Overall, ‘Boys’ is a treat to watch and I cannot wait to see what this company tackles next. 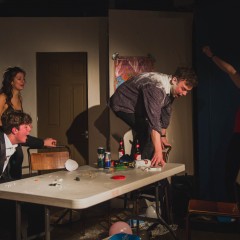 Following a tour across Bedford, Durham and Birmingham – Fourth Wall Theatre Company in collaboration with Lion Theatre Company has landed in London with Ella Hickson’s ‘Boys’. Despite it being an ‘Amateur rights’ production, amateurs are nowhere in sight within this gem.