A show with an interesting concept but it ultimately didn't come together.

Toujours et Près de Moi describes itself as a combination of music, dance, circus and physical theatre, and presents an interesting idea and interaction with technology through holographic effects. The story is quite abstract, but seems to portray two people looking through  boxes of memories, which come to life via holographic projections of dancers interacting with each other and said boxes. These projections appear to be their past selves, and in the story they present we see regret, loss and betrayal. However it is unclear as to exactly what the story is portraying, some scenes appear to relate a miscarriage, while others illustrate a second woman and it is unclear at different points whether she represents an affair or the lost child.

Ultimately the performance fails to come together as a concept, being both too abstract and ambiguous. The pace and tone of the piece never change, and so it struggles to hold audience's attention. It would be a beautiful concept for a short 10 minute film, yet for an hour long production it really required more substance. A small change of tone in some narration within the middle section might help point towards this but it didn't offer much in terms of clarifying what the show was trying to relay, if not confusing it more, with the narration about their relationship at odds with moments which appear to look like domestic violence.

Beyond the projections, the interaction of the couple on stage did not go much past mimed movements and emotions. While the technology of the projections is impressive, and the movement captured within this equally so, even this failed in some aspects. The intention was evidently to illustrate the projections interacting with the boxes, yet depending on where the audience was sitting it was missaligned, giving a surreal effect of characters sitting halfway down the wood as opposed to on the lip of the box. As a result it may have been more impressive to see the dance and interaction played out in person.

Toujours et Près de Moi has some potential; it begins with an interesting idea and striking visuals, however it is too ambiguous and lacks cohesion to be truly entertaining or meaningful to an audience.

Toujours et Près de Moi is showing at The Assembly Roxy from 21-27 Aug. Tickets can be booked here 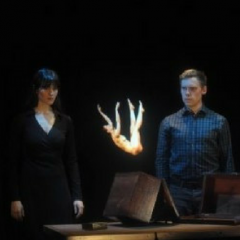 A show with an interesting concept but it ultimately didn't come together.