A funny and thought provoking look at modern society and modern relationships.

Performed in Summerhall's Roundabout, One Life Stand is an intense foray into one night in the lives of three people, whose journeys diverge and intersect, making them think about how they live and their search for intimacy. Kat and Kit have very different perspectives on their relationship, and in a night spent apart they are presented with many questions and moral dilemmas to face. The show ingeniously incorporates the fast moving modern world and the way in which technology touches our lives. The three characters are somewhat claustrophobicly enclosed on the round stage, yet for much of the performance, they exist in their own separate spheres. Using lighting and sound effects they relay the way in which the characters interact with each other, primarily through the medium of their phones.

The performance is so intense due the high sexual tension of these characters, which forces the audience to question social standards of relationships and interactions. All of these characters are infuriating, making bad life choices, which makes for an incredibly funny dynamic. Equally, the performance cleverly highlights a myriad of social issues from the hypocrisy of champagne socialism, to the impact of social media on our lives and even the double standards of gender inequalities. It taps into many issues of being a millennial, particularly in its humour and ironies, but it also becomes uncomfortably relatable - how many of us also communicate through memes? Does this make our communication disingenuous? Or prevent us from communicating?

This production achieves a lot and as well as being food for thought it is incredibly entertaining. While many of the devices used were very clever, it was not immediately clear how this was working, and could take the audience a while to decipher what was going on. Perhaps polishing this up a bit to make it clearer would help. Equally, the three microphones were constantly competing for attention, not to mention being in competition with the music, making it difficult to hear when the characters were singing. With a bit of fine tuning, One Night Stand could be a truly excellent production.

The show really digs deep into how we relate to others and how we choose to live our lives. It is a funny and thought provoking look at modern society and it is definitely one to watch.

One Night Stand is showing at Roundabout at Summerhall, 18-20, 22-26 Aug. You can find tickets here 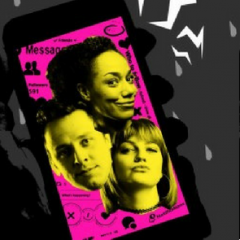 A funny and thought provoking look at modern society and modern relationships.