A fully consensual, highly educational induction into the inner sanctum of the Cliterati

Three mysterious hooded figures chanting in what may or may not be Latin welcome you into this meeting of the Cliterati. You're not excluded from joining if you have a dick, but you can't be one. If you aren’t comfortable at any point you can leave with no hard feelings; this is, after all, all about consent.

Tessa Waters, Victoria Falconer and Rowena Hutson’s powerhouse vocals are a hit from the very first note, and their original songs are catchy and well-written. A number about the sexist history of pockets has the audience in stitches, and a twee song about how boys only hurt girls because they like them hits home hard, without ever losing the humour.

My favourite part of the show is, without a doubt, the gameshow ‘Lagoon of Mystery’, which focuses on the lesser known facts of the vulva. ‘The whole thing isn’t the vagina, the vagina is the hole,’ they tell us sagely, as three (consenting) audience members become contestants who have to identify parts of Hutson’s full-body vulva costume and guess little known facts about the clitoris. Falconer absolutely steals the show here, with her superb improvised songs using a keyboard as accompaniment; she clearly has an incredible inherent talent for comedy. It is a hilarious and brilliantly simple way to educate people on something they really should know, but probably don’t.

There are, unfortunately, moments in the show when the energy feels very low, and some of the talking between songs and sketches is a little lacklustre. Picking up the pace of the entire show a notch or two would really help this. There also seem to be a few lighting issues, where whichever woman was in the middle was rarely lit. Overall, however, it is a fantastic show with some very important messages and lessons to share, and a hell of a lot of glitter! 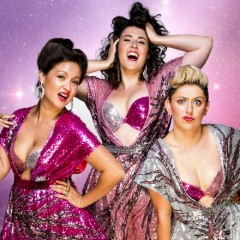 A fully consensual, highly educational induction into the inner sanctum of the Cliterati