Interesting stories that need a touch of comedic flair

‘All of my stories are true, and as such a lot of them have very disappointing endings,’ Nicholas dutifully informs his audience at the beginning of the show. He’s not wrong. Some of the stories seem to have no real ending at all, which lets down a fair bit of his material.

Having spent 27 years working on TV and radio as a BBC broadcaster, Nicholas has a lot of great anecdotes to tell. There’s the time he was held hostage by Jesus with a coat hanger, the time he reported on the destroyed face of Elvis in a piece of blue cheese, and the huge mistake he made when live commentating on the Paralympics in 2012.

He’s also worked with a lot of famous people, who were not famous when he worked with them. He has a bell he rings for every person he’s worked with who has subsequently found great fame and success: Mel and Sue, Caroline Aherne, Graham Norton and Alan Davis are just a few examples.

He has, as you can see, had some amazing and fascinating experiences with some incredible people, which forms a good foundation for the show, but his delivery is very matter-of-fact, and is lacking in both energy and artistic license. I completely understand and respect his desire to tell the stories as they happened, but he would benefit greatly from a little creative flair. There’s a reason most people exaggerate slightly when they tell a story; it makes it much more entertaining.

Nicholas has a great basis for a really funny show, but he hasn't quite got the style or delivery he needs yet to really make it as brilliant as it could be.

Jeremy Nicholas: After Dinner Stories from My Disastrous Broadcasting Career is on at 13:30 at Gilded Balloon Teviot until August 27th. For more information and to purchase tickets, visit the EdFringe website. 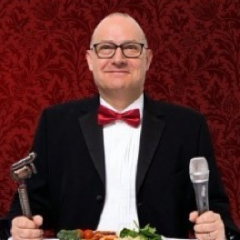 Jeremy Nicholas: After Dinner Stories from My Disastrous Broadcasting Career

Interesting stories that need a touch of comedic flair