A hilarious take on some of popular culture's best loved characters

A musical about two popular superhero characters can only go one of two ways. In the opening moments of Thor and Loki it wasn't quite clear whether this was going to be incredible or possibly painful, however before long it firmly established itself as a hilarious parody of the superhero narrative.

When the time has come for Odin to appoint one of his many sons as protector of Freya and her golden apples, the burden falls to a notable scrawny and underwhelming Thor. Meanwhile, Loki is aware that she doesn't fit in with the rest of the giants. In a jam packed tale, complete with dance routines and musical numbers, we travel across worlds, embarking on an epic adventure that unites the two heroes, and on the way the tale features an empowering message about being yourself, alongside an LGBT subplot and plenty of hilarity.

The cast had their work cut out for them, playing multiple roles and switching almost seamlessly, providing a healthy cast of characters and a complex and nuanced story. The musical numbers were highly entertaining and served to underline the parody of the story. This show was on the brink of perfection, and it is only a few small aspects to polish the production that would make it sensational. Costumes were inconsistent, with some fantastic examples, while the cobbled-together nature of others remind you that you are in a low-budget Fringe show as opposed to on Asguard - for example one frustrating moment where a soldier was dancing in a tie die skirt due to the doubling up of characters. Highlighting small aspects such as this may seem harsh considering how brilliantly entertaining the show is, yet with a few small tweaks, Thor and Loki could easily be a five star show.

Overall, Thor and Loki is a fantastic original production, providing all the adventure, comedy and catchy tunes you want from your superhero musical, not to mention all of the feels. This is an empowering and feel-good show that won't fail to entertain.

Tickets can be purchased here 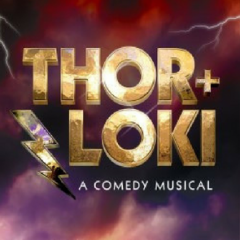 A hilarious take on some of popular culture's best loved characters