An interesting, but slightly eccentric one woman show

A one woman show about a topic as ambitious as the fall of the Berlin Wall is no mean feat. Yet in a somewhat eccentric mode of storytelling, Katherina Radeva weaves a moving tale about her own childhood in Bulgaria and a female couple torn apart by revolution.

Radeva's set is simple - she is literally walled in with building blocks, which are used to great symbolic effect throughout the show, especially as it comes to a climax. The only other props are a few lights and some speakers. While these provide useful settings within the play, they do somewhat hamper the flow - requiring some turning on and off. Katerina's movement was well timed and orchestrated to manage this but it could be slightly more polished to maintain the audience's immersion in her story.

The story is the standout aspect of the play, as a remembered tale within a tale, exemplifying the tradition of oral storytelling. The employment of a bizarre gameshow segment helped to illustrate the sheer incredulity of the regime people were living under. Equally, the use of Russian and English language for different characters was a clever way to construct them without losing meaning for the audience, and to demonstrate the miscommunications between them. The themes explored were incredibly interesting, looking at memory, and the complexities of living under totalitarian rule, and how revolution is not always positive for everyone.

While all of these elements were interesting in themselves they generally lacked a sense of cohesion when pulled into one performance. The different aspects hold much potential, and the story is certainly one that needs to be told, however the different strands need to work better together for the show to be fully realised. Radeva's performance is commendable, not to mention an interesting and ambitious concept. 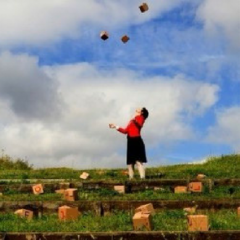 An interesting, but slightly eccentric one woman show