As someone that’s taken a two-year dance course, I’m a big fan of doing “research” through watching YouTube videos. It’s definitely the more casual, easy option. Unfortunately, I actually had to do something active for my Arts Award. As such, I thought it would be a good idea to watch a dance show that was being put on by a group of my classmates as part of their exam. (Plus, it was free, because they needed an audience.) And so, I filed into an uncomfortably warm school hall and sat on the scratchy green seats I’m familiar with from assemblies. I was sure things couldn’t get any worse; thankfully, I was right.

All Clear for Takeoff
I was incredibly happy to find that the show had an “international flight” sort of theme, where the dance routines were masked as in-flight entertainment. Two other Year 11s were tasked with the roles of announcers, which they tied in with special offers on holidays, snacks and drinks to create a more encompassing atmosphere which the show benefitted from greatly.

The routines themselves covered genres from Ballet and Contemporary to Disco and Bollywood, and different performers appeared in multiple routines in varying costumes. In my personal opinion, this variety was one of the main reasons that I enjoyed the show so much - watching a show full of slow, boring Contemporary routines isn’t my idea of fun. Some of these routines also featured familiar songs - for example, the Disco routine was to Stayin’ Alive by the Bee Gees. This familiarity definitely helped me to have more fun as an audience member.

From the Top (Again)
While I immensely enjoyed the performance, the quality of the dancing was sadly lacking in certain routines. That said, this was understandable for a student production, and it isn’t as though these routines let down the whole show. (They just let me down.) Despite finding it a little disappointing that a few of the routines weren’t more polished, I still had a great time and would recommend the show to others faster than the hop-shuffle-step in the Tap routine. Not that that would be difficult.

8/10 - Not everybody's kind of thing, but I would definitely return for more.

Just a sixth form student suffering with A-Levels. At least, I will be in September. 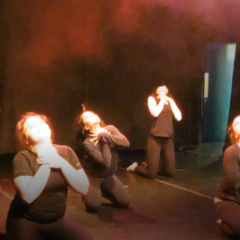 "Dancing All Around The World" Show Review