This is a slick show, with a character who seems to like a touch of danger in his life. A Jew from New York who is a must see in Edinburgh.

The audience are pretty restless. The show before had to be evacuated for a fire alarm so was running very behind, and there was some annoyance because of course people have tight schedules. Alex came out to greet us and apologise for the late running, and he promised to get it turned over as quick as possible. Indeed, he later informed us that the turnaround from the last set finishing and him starting was just six and a half minutes. That is incredible work from the Pleasance staff and everyone involved. Alex kept his promise, had already ingratiated himself with us (the delay was by no means his fault) and despite the lack of chance to compose himself - launched in to a great start.

His set was about his life as a Jew in America and as a writer; drawing comparisons with elsewhere and the likes of Robin Williams which segued beautifully in to a hilarious few minutes about Coco the gorilla. He also covered some of his celebrity connections with the BAFTA’s, Stephen Fry and Prince William - not bragging really, but certainly agreeable with the quality of his writing.

He covered some great material about politics in the UK & USA, and then spent a good chunk of time telling us a story about Nazis in New York and his own infiltration of their ranks. Alex is a great storyteller and provides us with hilarious entertainment. It’s a stand up show, and while I could tell you more about his threads, let’s not ruin the surprise - because you simply must go watch this show. Have a great laugh and engage with some good topics which is a refreshing change to some of the self-detracting and self-focussed work available.

More details and tickets at: https://tickets.edfringe.com/whats-on/alex-edelman-just-for-us 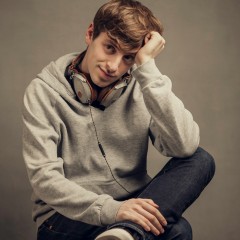 Alex Edelman: Just for us

This is a slick show, with a character who seems to like a touch of danger in his life. A Jew from New York who is a must see in Edinburgh.