A historical account of Muriel Matters’ role in the suffragette movement

Perhaps I’ve seen too many productions on women's suffrage, but this seems well-trodden territory in the arts scene. It did however come as quite a surprise to learn that an Australian woman had been so deeply involved with the British women’s suffrage movement.

A piece of feminist theatre, this show follows a documentary-style approach which paints a very clear and detailed picture of Muriel’s life, with Joanne Hartstone taking on the role of Muriel as the narrator.

Joanne portrays Muriel with the considered and contrived air of an upper-class woman, and being Australian herself, she does a good job with Muriel’s peculiar (shrill) accent: for any Good Life fans, think Margo Leadbetter.

The narrative moves through the various landmarks in the history of the women's movement detailing prominent historical moments, from the Conciliation Bill, the Cat and Mouse act, and up to the First World War. It is, however, the lesser known events of Muriel’s life, particularly, her airborne adventure that capture attention. Credit is certainly due here as the use of stage props produces strong atmospheric effects.

From a theatrical perspective, That Daring Australian Girl could have done with being a little bit more like the title suggests: daring.It uses a chronological narrative which felt unduly conventional for this passionate portrayal of a modern woman. Consequently, it is very much like reading from her personal diary, word for word, which is certainly informative yet a little dry.

Likewise, the script is overtly educational with many facts being spelt out for the audience. Asides are interjected for the sake of historical detail which detract from the otherwise natural flow of the narrative. The effect of which was a little more like being in a history lesson.

The play only really gains momentum after Muriel’s arrival in England and subsequent involvement with the Women's Freedom League. Her life beforehand, though relevant in a biographical sense, lend nothing to the performance.

The play was well received by the audience and makes for an eye-opening hour about a forgotten legacy. 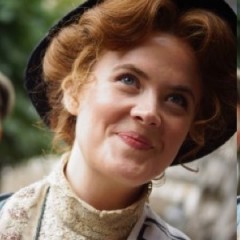 A historical account of Muriel Matters’ role in the suffragette movement