Voice MagReviewsLaurence Clark: An I…

Why is Laurence irresponsible? Apparently because he has Cerebral Palsy. The show humorously demonstrates that Cerebral Palsy has nothing to do with it - but all about being a Dad.

Laurence makes really good use of projection in what might be best described as a comedic TED talk. He’s mastered the one liners and wraps these up in a good thread of story addressing the concerns of youtube commentators on clips from a BBC documentary he was in (Don’t Drop the Baby). The video responses from his own kids are classic, humanising, and just as funny as the onstage action.

Throughout the show he busts some of the myths associated with Cerebral Palsy and as such this is an entertainingly informative hour. It’s great that this is available for us to understand more about the issues and challenges faced not only of Cerebral Palsy but also of fatherhood - whatever the other life challenges you face. It's great to hear it all put so eloquently and in comfortable humour too because it really helps you to understand the absurdity of the youtube comments - even when you knew they were wrong already; but now you know why.

However the performance itself didn’t seem suited to 3 sides of audience in a thrust formation - Laurence had rehearsed well to the front and even stage right side, but it was rare that stage left got any address - and I was sat in the corner of stage left and the front, so benefitted from a bit of the front on address occasionally.  With this in mind, whilst the jokes were good, Laurence didn’t really develop a rapport with a third of the audience and there was a noticeable difference in reaction around the room.  It might be because of this that I felt at times he went in to the odd tangent, that everything didn’t comfortably sit back with the arc of the show and came across as ‘filler’ in what is otherwise a promising performance, delivered by a clearly skilled comedian. Had the rapport been gained it would improve the overall enjoyability of this piece.

Another great trait is that he's got a good knack for setting up later jokes - using the projection screen to full effect in this case too. There are plenty of strong elements to the performance, he even waited outside the front to greet some of the audience afterwards which is a lovely touch.

If you’re going to attend this show - and it’s both enjoyable and enlightening if you do - be sure to sit front row in there centre - that seems to be the place to get the most from the show currently, although perhaps it will evolve with feedback and some further direction. 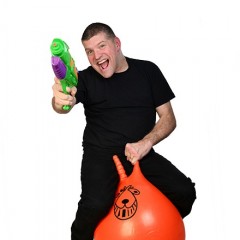 Why is Laurence irresponsible? Apparently because he has Cerebral Palsy. The show humorously demonstrates that Cerebral Palsy has nothing to do with it - but all about being a Dad.