This is a story of liberation and freedom from a time of extreme depravity and social control.

In 1989, at the fall of the Berlin Wall a young girl tells us of her life growing up in communist Bulgaria. She tells us about her parents and about Frida and Stacy, two lovers who struggle with their desire to be free of the regime.

Exploring issues of boarders and boundaries, as the UK prepares to leave the EU, this play seems particularly relevant against the current political climate.

Ideas of ownership, elitism and communism are mocked satirically to emphasise the corrupt nature of the regime. This is done by involving the audience in a farcical gameshow to demonstrate the state’s attempt to indoctrinate communist ideals through popular culture.

The theatrical devices employed were inventive: the scene depicting the Berlin riots which was symbolic of the revolutionary spirit of the 80s. Equally, I thought the child’s building blocks that later come to represent the Berlin Wall were a very pointed and visual metaphor. However, there was an over-reliance on the boxes to represent the characters, which wasn't completely convincing. In my opinion, Kat was more than able to convey the story without the need for props.

Likewise, Frida and Stacy’s story was compelling and important but until the final scenes, Kat’s own childhood story seemed slightly self-contained. However, despite a few technical errors from which she recovered well, Kat maintained a joyful optimism and youthful naivety throughout.

A politically-fused message that highlights the importance of freedom, liberalism and democracy. 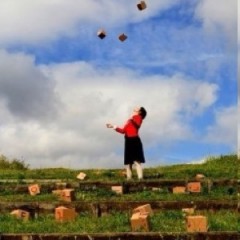 This is a story of liberation and freedom from a time of extreme depravity and social control.