Justin’s experience shines through. We’re in a good sized venue and it's pretty full. He needs to connect with a lot of people, and he does so with humour, agility and a likability northerners are known for.  He tackles such big issues as inflated prices at harbour-side restaurants and where to keep the ketchup.

The set is great. He walks through a good amount of stories in part about his kids, in part about his life choices, and in part about his observations of the places he’s lived and visited (including a great piece about politics). There’s a limited amount of self-deprecating humour; and this works well because he knows there’s so much more to talk about than just himself - a sign of maturity in his performance which I wish I could see more of at the festival.

I mention the politics he addresses. Yes there’s brexit, yes there’s Russia, but the meaty part of the set (gravy aside - watch the show to get this reference) is all about the condiment apartheid. You see he covers things the audience wants, the issues affecting everyday lives. This is exemplified by one comment a nearby audience member muttered - “That is perfect” - and I agree.

What seems sensible to note is that this set isn’t showy or flash. There’s no big reliance on any technical, backdrops or props in any form. The lighting state and downlighting used provided a lovely visual without distracting. There’s not a big show to wow you with, he hits a rare stumble even in reaction to audience responses, and a couple of times goes off book briefly. He also realises towards the end of the set that he had a few minutes to spare and a joke he was about to tell wouldn’t be as funny without a bit of context from a little story he didn’t actually tell us earlier on.  He handled this with grace and humour - getting the technician involved in a pretence of directors’ commentary - and it wasn’t that it was vital, it was the fact it was a standalone story he had time to go back and tell.  I saw another comedian a few days ago who had the same issue but didn’t handle it nearly as well and it really affected his set. The maturity shining through again.

In terms of delivery, Justin is very well timed. He speaks with pace but not rushed, and pauses perfectly to let punchlines settle in, or when telling something more long form and keeping us with him. This isn’t a set with one story thread, but he interlinks everything and weaves his way through the topical issues and how they affect his life, how his kids have affected him, and how cultural differences in locations affect him - be it California, Liverpool or his home of Manchester.

He also addresses the tragedy of Manchester Arena last year. I took a breath when he started. But he doesn’t dwell on the matter and addresses it’s impact excellently, he explains some of his own decisions and provides a little insight from a local who had to be in town the next morning for something (watch the show to fins out what). It’s not a funny segment in itself, he brings some light humour to some of it in a very appropriate way, and I feel he covers this with talent, sensitivity and an attitude of both community spirits and not letting the terrorists win. A brave man to include this in a comedy set, but excellently delivered.

For an evening of great entertainment, learning how to bring up kids if you haven’t already, and insight to the life of a Northern Joker - head on over.

More details and tickets at: https://tickets.edfringe.com/whats-on/justin-moorhouse-northern-joker 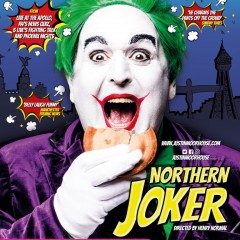 Justin’s experience shines through. We’re in a good sized venue and it's pretty full. He needs to connect with a lot of people, and he does so with humour, agility and a likability northerners are known for.  He tackles such big issues as inflated prices at harbour-side restaurants and where to keep the ketchup.