After a startling revelation about Banksy, Mark Watson wants to know more about empathy: how we can establish it, how we can maintain it. The Infinite Show attempts to break down the barriers between comedian and audience, to moving and frequently hilarious effect.

Mark Watson’s Infinite Show starts before it’s even began, with the handing out of postcards to the waiting audience. They’re instructed to honestly respond to the questions printed upon them: What’s the thing about you that people don’t empathise with? What’s your strangest opinion, habit or character trait? What’s something about you that others find odd?

Watson’s been talking about mental health for years – most recently on Susan Calman’s Mr. Brightside podcast – but this year, which has seen him get a divorce and attempt to co-parent his two children, has given him a veritable ‘psychological pummeling’.

And so, with this show, Mark Watson is attempting break down the barriers between the audience and the stage; to find a human connection between himself, a removed and insecure comedian, and those who have gone to see him perform. Hence the cards.

The Infinite Show works off the premise of being a collaboration between Watson and his audience. While on the one hand this model requires slightly less preparation than a conventional show, it necessitates genuine, spontaneous comedic skill. And after 15 years of stand up, Mark Watson is a natural. He is excellent at ad-libbing and riffing off the responses of the audience. They are varied, and unlike the rehearsed spontaneity of magicians, real.

Yet despite this, Watson still exudes an anxious energy which in some way is reassuring: the idea that this performer, a frequenter of our TV screens (if your TV screen is mainly showing Dave), still seems slightly on edge doing something he has notable skill at, suggests that maybe anxiety isn’t some terrible thing, but actually quite normal.

While Watson is aiming for a universal empathy, his prepared material is sturdily middle-aged. He jokes about his divorce, his regular encounters with his childrens’ school late book, and his deep hatred of Center Parcs. It may not be ‘edgy’ comedy, but it feels sincere.

Watson’s aim of The Infinite Show is to spawn an unlimited amount of conversations and genuine connections, which will be infinitely variable because of the multiplicity of human thought. Whether that goal will be achieved is debatable, but it was an hour of thoughtful funniness. Now, what’s odd about you? 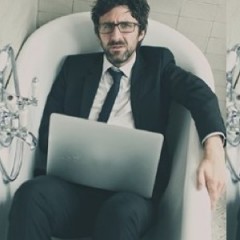 After a startling revelation about Banksy, Mark Watson wants to know more about empathy: how we can establish it, how we can maintain it. The Infinite Show attempts to break down the barriers between comedian and audience, to moving and frequently hilarious effect. 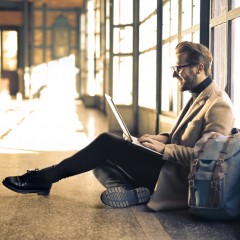