Imagine a sketch show doing a parody of a niche Fringe production, and this would be it. An excellent, entertaining hour of multitasking music and mythology.

Bowjangles are a street-performing string quartet that sings and dances, lunges and puns, all while playing string instruments (excellently). It's a niche concept, and yet is supremely popular: the hall was packed, and evidently keen fans were spotted wearing band t-shirts.

It’s easy to see why.

What starts as a musical retelling of British folklore (the tale of Shuck the black dog, from North Norfolk, to be precise) evolves into a quest to the mythical land of ‘Bowtopia’, in order to win in the ‘Battle of the Bass’. The format of storytelling-through-song reminds me of Prokofiev’s ‘Peter and the Wolf’, albeit with more disco rhythms. Think ABBA meets Vikings, via the vehicle of strings.

They seem to have emerged from a different era, a time of yore populated with fiddlers and travelling shows, through which tales of adventure and intrigue flowed. The show is smattered with references to Lord of the Rings and fantasy, and at one point they fight with their bows like lightsabres. There are puns aplenty, with references to ‘Lord of the Strings’ and ‘Baroque and roll’.

But it is a clever and incredibly well-rehearsed show, and the performers are evidently comfortable enough with the material and each other as to be able to improvise and ad-lib occasionally, and to have fun.

The quartet, formed of Esme Gaze, Ollie Izod, Mitch McGugan and Bertie Anderson, work brilliantly together, and have talent coming out of their eyeballs. They truly are triple threats (can sing, act and dance) – and are armed, with bows.

I wouldn’t have ever chosen to go to see Bowjangles, but I am glad I did. It is wholesome and fun - a perfect show to take kids (8+) to, without being a ‘kids show’ - and the extent of their musical multitasking is slightly baffling.

You can read our interview with Bowjangles here 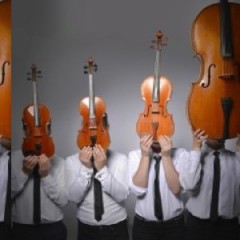 Imagine a sketch show doing a parody of a niche Fringe production, and this would be it. An excellent, entertaining hour of multitasking music and mythology.