With a musical and energetic start this is absurdist comedy at its best. And let’s not forget the blue moustache.

Let's kick off with the full show title for clarity: John-Luke Roberts: All I Wanna Do Is [FX: GUNSHOTS] With a [FX: GUN RELOADING] and a [FX: CASH REGISTER] and Perform Some Comedy!

John-Luke Roberts kicks off with a start that sets the tone and pace of the rest of the show. He’s in a grecian-esque setting, in a venue I quite like with fairly comfortable seating (for a lecture theatre) kitted out nicely with some decent lighting and black tabs done well for the black box theatre style.

John-Luke uses a simple device to string together his show of absurdity - the spice girls. It’s inventive and totally appropriate to his piece. This show is like a manifesto for absurdism through art. and he has great characterisation with just as good physicality.

The show has a great pace to it; racing through much of the time (as per the energy he brings) but he skilfully slows things down as needed for more dramatic and subdued points. The ability to race along, pause for a moment, and pick up the pace again in perfect timing and conveying the emotion he intended is a fantastic feat that few performers could pull off.

The energy and storytelling is supported by some good use of the set and some very smooth tech. This is a production that, given the pace of sound effects and importance of the lighting state changes, warrants as much as any a specific call to and congratulation of the technical support. It is a major part of the success I feel. This is in part due to how, despite the absurdity, it was easy to follow. The lighting and timing work together to really make this happen in support of the script.

And how do I know it was easy to follow? Well there’s even a brilliantly placed reflective moment where the show thus far is recapped and there’s a great moment of audience call and response - John-Luke essentially quizzes us on what’s happened so far, and the confidence in the audience in response to each of his lines is brilliant.

I wrote a note to myself at one point, and it simply reads “Ingenious” - this is a simple way to express the show. There are some great set-ups for later jokes (great because they’re not only funny but you don’t have to needle through your mind to get the reference - it’s so clearly conveyed). What this shows demonstrates is that we make systems to make sense of the world, but they never answer everything.  We hold on to them anyway and this causes suffering if you don’t fit in these systems.

All in all this is a solid show which may not be appreciated by all. But if you’re looking for some mind-boggling comedy and need a pick-me-up of energy then it’s one to go see.

More details and tickets at: https://tickets.edfringe.com/whats-on/john-luke-roberts-all-i-wanna-do-is-fx-gunshots-with-a-fx-gun-reloading-and-a-fx-cash-register-and-perform-some-comedy 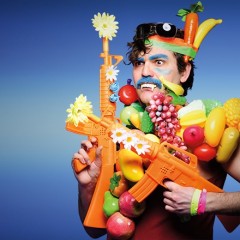 John-Luke Roberts: All I Wanna Do Is...

With a musical and energetic start this is absurdist comedy at its best. And let’s not forget the blue moustache.