Wearing a wig and novelty teeth, John Kearns walks on stage with next to no fanfare, staring awkwardly back at the crowd who wait eagerly. He comments dryly on the uncomfortable moment, stating we have the look of a crowd who believe he can’t do it. Somehow, and perhaps this is testimony to his brilliance, this came across as a lot more funny than it reads.  This strange and prolonged interaction set the tone for the rest of the show.

Squawking in an exaggerated London accent, Kearns details the boring and mundane life he leads, talking about his almost father/son relationship with a local shopkeeper, and his strangely bleak and yet liberating views on the world.

The show eventually meanders its way to what will serve as the plot threat for the show, the spectacular win, and sudden death, of a racehorse. That fleeting nature of mortality sets Kearns off on an examination of what it means to be alive, and what we do with the time we have. It doesn’t necessarily scream comedy yet this record breaking performer manages to get real, raucous laughter from such a gloomy topic.

Kearns is a curious performer in a number of ways. His comedy is simultaneously observational yet surreal, mundane yet fantastical, a depressing exploration of existentialism yet filled with hope and meaning. During these softer times it’s hard to see where the ‘character’ ends and the real Kearns starts. Maybe they are inexorably linked, the former just an exaggeration for the latter, or a mask to provide the anonymity required to flourish.

There were times where the act ‘slipped’, but was it really Kearns corpsing, or was it part of the act? That constant questioning danced in the mind while watching one of the most interesting and unpredictable performers I’ve seen in a while; a refreshing take on the typical stand-up routine.

I won’t say that his style of comedy is for everyone. If you like a laugh a minute you won’t necessarily find it here. The build-up can be slow, agonisingly so at times, but the pay-off is almost always worth it. 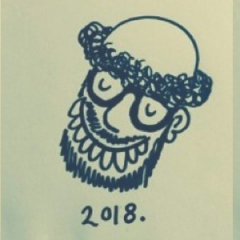