What can I say about this show… It was out of this world. Quite literally it was utterly crazy. It wasn't a play or a stand-up comedy gig. It was Claire Sullivan doing whatever made herself laugh. And it was kind of nice to see someone laugh so genuinely at herself.

As I walked into the venue, Claire is sat in pink dungarees with a fishing rod in the middle of the stage, fishing. Suddenly the music starts and she's doing a series of costume changes whilst shouting ‘I am a woman’. Honestly, I couldn't tell what was going to happen next and it soon became apparent there was no logic or story to follow.

I guess that’s why it was so entertaining to watch, I had no idea what was coming and so I gave into the insanity and let myself be taken on a ride of dog-mania. Oh, did I not mention? Claire loves dogs. She dresses up as a variety of different dog breeds holding a one-woman dog show. Her impression of a pug was spot on.

From telling ‘poems’- don't expect any Shakespearean sonnets- to holding a quiz involving the audience, to simply laughing at her own jokes in a very contagious manner, Claire is a bag of crazy madness. As I left, I honestly felt I had just stepped out of an alternative reality where people wore dog-hats and sang and danced with glitter all over their faces. It was a bit like the weird and wacky world of Charlie and Chocolate Factory: there may as well have been umpa lumpas.

I was not sure what to make of this performance, as it is so far from anything I have ever experienced but I did come away with a smile on my face and a hand-made gift. I think I saw this just when I needed it: if your looking for something refreshing, and you've seen a bit too much conventional theatre then give this one a go. I wont say ‘be prepared', because you just can't be. 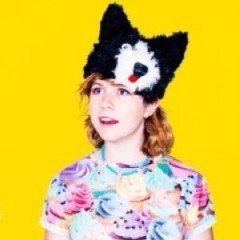 Claire Sullivan: I wish I had a hotel for dogs