A relaxed hour of comedy with Scottish comedian Scott Gibson

For a 4pm on a Sunday afternoon the room was pretty packed. It seemed a predominantly Scottish crowd, and it soon became apparent that Gibson is a very Scottish comedian. Definitely not from Edinburgh though, he made that much clear.

He started by confessing to the audience that he doesn't really have a set focus or theme, but just improvises and tells stories as he goes. This came across in his relaxed style, however it seemed clunky in parts. He started by talking about recent death of a family relative, which moved onto stories from his adolescence and holidays abroad with friends. He also spoke about Scottish idiosyncrasies (a few of the jokes went over my head), but went down well with the locals in the crowd. Overall, each joke was well execute but didn't seem obviously clear in how it related to the overarching point.

In true Scottish style, there was use of very colourful and less than child-friendly language, but he certainly got the desired effect from the crowd. There were audible laughs from the audience as Scott narrated comical stories in an angry and irate fashion.

I enjoyed Scott’s relaxed manner, most of all I liked his closing piece which linked back to the theme of embracing life: its all too short and only when its too late do we realise that we have wasted our time on things that don't matter. A surprisingly moving end to a jovial hour of irate Scottish humour. 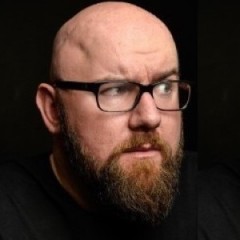 A relaxed hour of comedy with Scottish comedian Scott Gibson