Former figure skating champion turned comedian Roman Fraden invites you to join him as he re-enters the closet in his outrageous personal journey through life to date.

This show is a bit of an enigma, and very difficult to describe without descending into cliches. Surreal, personal, high energy, crass. All of these are applicable to the absolutely filthy tales of gay debauchery that Fraden presents.

It definitely is a personal show, all the more so given the intimate nature of the Balcony in the Gilded Balloon. It meant that the collective sense of awkward shock was all the more palpable as he parades the stage with an ejaculating cock puppet, or when he locks eyes with you while dancing. And boy, can he dance.

The stories he has are scandalous, having spent time with Tonya Harding, trying to hook up on Grindr and Craigslist, and also trying to explain the cause of ‘Gay Face’. Interspersed with dance and song, Fraden was a real raconteur, and highly entertaining.

I like Roman Fraden. He is in the class of American comedians who are funny because they’re actually funny, rather than just loudly shouting obvious observations. His talents extend beyond comedy into dance and music, and I’m amazed at how he kept a straight face while espousing some of the most filthy content I’ve ever heard at the fringe. His debut hour is a great platform from which to built upon, he just needs to find a way of better meshing his various talents.

I will confess I genuinely struggled to settle on a star rating for this show. What worked well was simply fabulous, but the parts that weren’t as strong were incredibly divisive. Yet, to give a three would be to rob the show of the acclaim it deserves.* Roman is exceptionally talented, his debut show is incredibly well considered, personable, and so damn funny. I genuinely believe that as he settles, Roman is going to be a force to be reckoned with.

Roman Fraden is definitely worth a punt if you’re looking for late-night blue humour. Probably don’t go with the parents though!

* If you want to read our star rating scale, we’ve published it here. 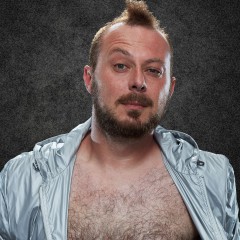 Roman Fraden: Back in the Closet