Suzi Ruffell's Nocturnal is a joyous hour of stand-up which manages to create an atmosphere of hopefulness while discussing the dismal state of the world. Confronting internet trolls, pervy monks and the mundanity of hen-dos, Ruffell delivers her material with empathy, expert timing and the ease that only comfy shoes can afford.

Suzi Ruffell loves doing stand-up. She loves, loves, loves stand-up. She tells us this at the very start of the show, after individually greeting each audience member as they enter the room. This creates an atmosphere of friendly familiarity: we’re all here to spend an hour in each other’s company, to enjoy our mutual appreciation of comedy.

But it is evident that Ruffell – or, ‘the Ruff Stuff’ as she refers to herself (it’s a nickname she’s trying out) – adores comedy without her even telling us. She seems to exude delight in her occupation, bounding about the stage like a child telling a relative what magical gift they received for Christmas.

Her energy and smile are infectious, even when she’s talking about internet trolls and homophobia and how the world’s become a little bit too much like an episode of Black Mirror. She seems to project empathy, sharing her own fears and paranoias with the audience so we can share in them: to show the audience that we are not alone in feeling anxious in the current climate, because really, ‘if you don’t have anxiety, I don’t think you’re concentrating’.

Ruffell takes us on several very funny journeys with her: down the rabbit hole of her insomniac ‘3am press conferences’, along far-reaching Twitter spats, to the ever-so-slightly homophobic small towns of Australia. And refreshingly, Ruffell talks about her sexuality without ever descending into self-deprecation: a line notably highlighted by Hannah Gadsby.

Rather, Ruffell talks about the pain of growing up gay, feeling strange and alone, while hopefully imagining a future where Simba and Pumba are out and proud, Elsa’s got a girlfriend and Disney creates a princess who wears suits and comfortable shoes.

Nocturnal is a truly joyous hour, and while Ruffell may be unable to ever relinquish her anxiety while we still don’t know if Britney’s okay, she seems to be having a wonderful time talking about it. If you’re worried about the state of the world at the moment (let’s be honest, that’s all of us) Nocturnal is for you. 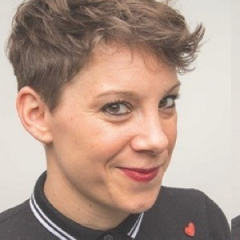 Suzi Ruffell's Nocturnal is a joyous hour of stand-up which manages to create an atmosphere of hopefulness while discussing the dismal state of the world. Confronting internet trolls, pervy monks and the mundanity of hen-dos, Ruffell delivers her material with empathy, expert timing and the ease that only comfy shoes can afford.