Voice MagReviewsFlight of the Concho…

What a night - the perfect blend of comedy and musical genius.

This New Zealand folk/parody duo first hit the music industry in 1998. After airing their largely improvised BBC radio show in 2004, Jemaine Clement and Bret McKenzie went on to conquer the international scene with TV shows and two studio albums. This year, with “Flight of the Conchords Sing Flight of the Conchords tour”, they hit the UK.

Some might remember Concords for “Tears from a Rapper” or “Hiphopopotamus vs. Rhymenoceros”. When I was lucky enough to see the Conchords on Wednesday night at the O2, the former was performed and the latter surprisingly not. I did miss hearing Hiphopopotamus, my favourite of their songs, but the duo complimented the show with a whole variety of new material.

If not the catchy melodies - executed rock-star perfectly - the main attraction of the Conchords is their dry wit. Familiar lyrics from old classics promised waves of laughter throughout the arena. Whilst the crowd certainly enjoyed the new material, at times jokes were missed because the lyrics were hard to understand in a live setting. However I certainly wasn't expecting so many new songs which was a great surprise. Conchords have a timeless knack of telling stories, puns, achingly cringy jokes through their music whilst maintaining exceptional standards on guitar, piano, flute and ukulele.

Every few songs, Bret and Jermaine put down their instruments and used their inimitable stage presence to relay anecdotes of "life on the road". I think part of their popularity is the fact that, despite their global success, then duo have retained their typified humbleness and self-deprecation, forever acting as the underdogs. The majority of their jokes revolve around their supposed stupidity and cluelessness, appealing to the audience's natural human flaw of making mistakes. They're relatable, relevant, and never take themselves too seriously.

I found the minimalism of their production value refreshing. Spotlights changed colour throughout, depending on the mood of the song. House lights were warm and simplistic, beaming up at the audience only rarely in flashes to encourage us to sing along.

Wednesday night was a cross between a pop gig and stand up comedy: the best of both. The surprising mix of new material and classics was an innovative mix to engage and entertain the audience throughout in an evening of anecdotes, cleverly constructed comedic melodies and above all, laughs. 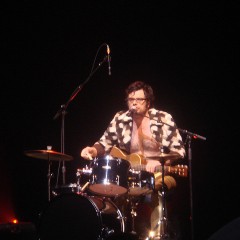 Flight of the Conchords at the O2

What a night - the perfect blend of comedy and musical genius.