A murderer and victim come face to face...

Florence Williams plays Emma, a girl whose father was attacked and killed by Scott (Elliot Windsor) who was just 16 years old. Face to Face documents the few times since sentencing where the two come face to face. The first time is in the visting room at prison nine years after Scott's sentencing. Scott has appealed and now Emma wants to understand how the person who killed her beloved dad could be released early from prison and whether he has actually changed. The other times they meet you will have to find out for yourself.

The two captivate the audience immediately as we get to discover both of their feelings years on from the attack and get to hear them both tell the story from their perspectives, exploring how their emotions in those few moments. They kept me engaged and on the edge of my seat throughout. Their use of soundscapes were particularly effective, both shocking and perfectly in sync when necessary, and their stage combat was thrilling. It can be very tricky to make stage combat realistic but Florence and Elliot did this successfully, almost making it look easy.

The acting itself was emoting. The actors showed a whole range of quite complex emotions including; grief, anger, misery, fear and guilt. Their whole bodies took on these emotions from their facial expressions to their feet and even in the tone of their voice.

One of the most effective things about the piece is the strong, emotional script, written by Cristina Alagaratnam. Cristina had obviously taken the time to really think about how to show both perspectives, and Scott's reasons for how he got to that point without justifying the murder or making the audience feel sympathetic towards him.

Overall, I found the piece very clever in the way it explored a murder and the grieving process which Emma's character is going through. HiddenViewz had clearly thought carefully about how to tell this story and have spent a lot of time perfecting the choreography. It was clever, precise and an emotional show. 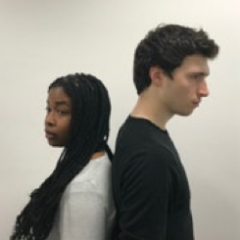 A murderer and victim come face to face...