Things are going to get weird...

Its 7pm on a Thursday night at The Warren in central Brighton and despite living in Brighton for the last 3 years this is my first ever time at this venue.

A series of pulsating pop up bars, street vendor food booths surround a collection of tables, deck chairs and there is an effervescent buzz of festival-like spirit in the air. Grabbing a beer we are moved swiftly to the venue on site ; The Burrow.

The Burrow is perhaps more better described as a shipping container... because that’s exactly what it is. The show about to kick off is Australia’s up and coming new crazy comedy act and one man show, Garry Starr.

He has been described as 'The conceited, pretentious thespian is a mainstay of comedy' and his reputation does not disappoint. The premise of this whacky and wonderful show centres around 'Theatre is dead!' and in 50 minutes our protagonist strives to reignite and reengage the audience with a love of the arts.

Ranging from the extreme to the outright bizarre Gary succeeds in enthralling, engaging and leaving some people outright gob smacked with his hilarious performance. From Geisha dancing to an interesting Shakespeare meets Britney Spears ensemble the show aims to cover all main areas of theatre and the arts.

Drama, comedy, contemporary dance and singing are all woven into one as Garry engages the audience, dragging various individuals onto stage to integrate them into the show.

Costumes are in full force with beards, wigs and foam swords. Garry has a particular tendency for 'Russell Brand-eqse' articulate and raucous vocabulary that both entertains and leaves some scratching the back of their head.

From catching fruit pastels in his mouth thrown from the audience to making them play a dead Juliet to an ecstatic Romeo, the show is an eccentric and eclectic burst of random and bizarre.

He achieves the comedy factor extremely well. Highly intelligent and fiercely honest, some literary jokes and references may have been lost on the audience as he spouted Pinter and Ibsen at length, but this was embedded with a warmth and electricity that made the show both inviting and highly entertaining.

At one point during a 'romance' segment Garry (wearing only a white thong) pulls out a plate of pasta and makes members of the audience re-enact a Lady and the Tramp style smooch which was met with laughter and some uncomfortable exchanged glances. Unfortunately I was one of the audience who had the privilege of a wet sloppy smooch on opposite end of a slippery piece of pasta.

This I would like to say was the pinnacle of the show but alas, nothing could quite trump that ending...

Definitely not one to take the grandparents to but all round a fantastic and refreshing (slightly disturbing) experience! 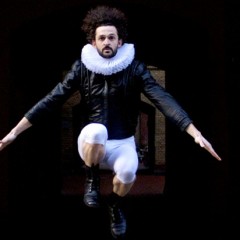 Garry Star Performs Everything... & Terrifies Everyone!

Things are going to get weird...