The production is about the teachings of Kung-fu disciplines through the Shaolin Monks beliefs, and the relation they have towards the Western world. It highlights their history and contrasting ways in that they deal with the world. The choreographer reflects the monks lives through each part of the physical setting as well as his choice of movement styles.

On the 28th March 2018, I watched Sutra at Aylesbury Waterside Theatre with my A Level Dance class.

As I have seen the production before online, I was expecting my experience to be similar to when I viewed it in my A level dance class. However being at the theatre gave the atmosphere of the dance a completely different feeling. The theatre was very modern which really reflected the overall production, as the themes of the Old and New China were demonstrated above the seats, where on the ceiling hung wooden beams. This related directly to the choreographers idea to use wooden boxes by the monks on stage. The boxes highlighted the comparison of development between the Shaolin Monks and the choreographer of Sutra, called Sidi Larbi Cherkaoui.

Having my A level knowledge on the dance enabled me to really connect with the Monks as well as Sidi Larbi, understanding his meaning to why he incorporated certain movements or formations to reflect the history of the monks. Although Larbi wasn’t actually apart of the piece which I went to see, the figure who represented him clearly demonstrated the actions and beliefs from the Western world in relation to the Shaolin Monks being from the Eastern world. The piece incorporated many different transformations of the boxes to resemble either isolation, power, destroying of temples, safety and emotion of the Monks past experiences. Larbi successfully showed the hidden difference of the monks traditional religious disciplines as the rapid dynamics which the monks portrayed highlighted their power and pure control of the body, however also presenting their control of the mind to keep the fluidity of the attack phrase linked with their peaceful meditation and links of Thai Chi teachings.

As the piece developed, you can spot the use of the new generation straight away, as the piece starts with Larbi and a boy called Dong Dong downstage right in a spotlight. The significance of the relationship between them both was a major factor in the production as their connection was what kept the piece developing. I feel that the constant idea of the contrast between the two worlds being portrayed, tells the audience how much the Shaolin Monks culture and religion is important to them. The props of the wooden boxes and the one metal box, the staffs used as the monks weapons as warriors and the costume changing from the monks normal attire to full suits is another factor of Larbi's choreographic intention of bring across their priorities and differences between old and new china, and i believe he successfully told a story including all their main norms and values. 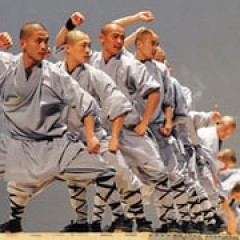 The production is about the teachings of Kung-fu disciplines through the Shaolin Monks beliefs, and the relation they have towards the Western world. It highlights their history and contrasting ways in that they deal with the world. The choreographer reflects the monks lives through each part of the physical setting as well as his choice of movement styles.