Voice MagReviewsP - A solo show with…

It sells itself as a show that refuses to see the world as a glass half empty, and this Soup-Stained Arts solo show is sure to fill your cup to the very top, and then carry on pouring.

The protagonist, also called P, is an accident-prone woman of 6 foot three with a penchant for brightly coloured clothing who somehow squeezes lemonade out of the most stubborn of lemons in her quest for a job and, later, love.

Actor Leila Herandi completely immerses herself in her creation, leaping between roles with an irrepressible enthusiasm. She jumps from protagonist to narrator, from actor to musician, and even finds time to implement a primary school style projector in her performance.

It is, however, a show that is still in its infancy, requiring further development polish the overall performance. There were a few occasions where the actor stumbled slightly her lines or certain plot points, and the show would temporarily lose the vast momentum it worked so hard to create.

As well as this, P’s character and the events that befall her occasionally stray into the realms of excessive hyperbole and an implausible ridiculousness. The strongest aspects of the script lie where Heraldi shares her acute and comedic observations of everyday life, and personally I would have liked to have seen more of this.

Despite this, the play is a giggle ridden peek behind the rose-tinted spectacles and lightning bolt emblazoned boots of an eccentric stranger, brought to life by Heraldi’s energetic and engaging staging. It not only delivers a witty narrative through a tightly woven collage of artistic disciplines, but also offers free snacks mid-way through.

So, if you want music, dance, theatre, laughs and pre-peeled pistachios, this is certainly the show for you. 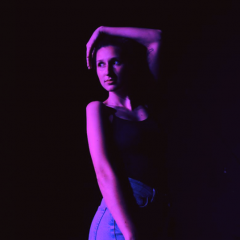 P - A solo show with pistachios