On 13/5/18 I went to watch Our County's Good in the Crucible Theatre in Sheffield by the company Ramps On The Moon. It was written by Timberlake Wertenbaker.

The play Our Country’s Good is set in a newly colonised Australia just after the American war of Independence. The new colonisers are a mix of British soldiers, religious people and convicts.  Early on in the play one of the soldiers is tasked with directing a play with the convicts as actors. During the rehearsals he faces a number of challenges to do with gender, race, rights of the convicts and the disapproval of his fellow soldiers. Despite many hardships he proves that the act of participating in a play is rewarding and uplifting both for the convicts and the audience.

The biggest feature of this production of the play was that the company Ramps On The Moon has cast many disabled actors, including many actors who were deaf or hearing impaired.  The performance was spoken, signed back actors and also had live captions for the audience to read.  Additionally, one of the actors was also a blind descriptor.  The variety of ways that the script was communicated contributed to making the play quite the spectacle to watch.

The set was a set of wooden planks and sand, with some plants and trees in the background. There was also a sheet of material suspended on ropes that served as the ships sails and also a tent when lowered. It created quite an authentic feel and I liked the way the set grew as the soldiers became more established in Australia. The lighting was quite bright and helped to set the scene of a new Australia and also worked well when the scenes were set at night as it was quite dark but still allowed you to see.

The overall acting was very good with no performances sticking out in particular but no one lacking either. For all the good performances the play did not always flow fluidly and at times felt quite tricky to watch because there was so much going on. I felt this was particularly true at the start of the play - the on screen captions were very distracting. I also found the during Aborigine’s scenes a bit odd and distracting as he was performing and describing the play for the blond at the same time. In fact, I only understood his weird whispering during his scenes were the blind description after the play. I also felt that his role was not impactful enough to the audience to justify the part.

Overall I really enjoyed the play and its plot and thought that the whole way it was signed was very clever. Despite at first feeling like the stage was quite messy and cluttered after the first half hour I grew used to this messiness and started to enjoy the play even more. I have also found some reviews from other sources that I have found interesting:

3/5 "Aesthetics and accessibility combine brilliantly in the way signing and captioning are woven together.."- The Guardian.

4/5 "This richly textured ensemble piece looks deft and elegant when one actor embodies a character physically, while another supplies the speech.."-The Times.

I would recommend this play to people who like a good story and also to deaf and hearing-impaired people as the play was extremely accessible. 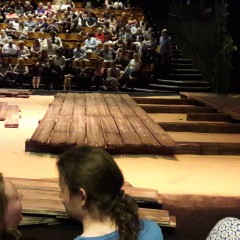 On 13/5/18 I went to watch Our County's Good in the Crucible Theatre in Sheffield by the company Ramps On The Moon. It was written by Timberlake Wertenbaker. 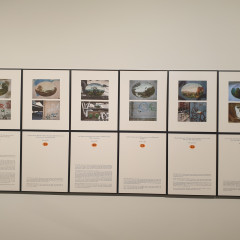