Voice MagArts AwardReviewsThe Rapunzel at the…

I went to a event show called The Rapunzel.

The event I went to is called The Rapunzel.

It is a fairy tale based on the book which everybody knows about the story of The Rapunzel.

It's a woman who has a very long-lasting hair that can lift a person from a building or another.

From the beginning of story with Rapunzel and her mother known about their relationship between them.

Then we had another character which was called the Goldilocks is another story based on a book.The Goldilocks character is different to the Rapunzel because it has a animal which there three bear and one girl. However what i really was they both tie in the story basically, what i meant was the two character join together and something a new story which i never seen it before so it made feel surprised and enjoyment.

From the starter, it begin with some goofy and childish from the part where they brought big shaq as a "parody" song. everyone was so motivation and standing up, gather along the song but i didn't like because it was really cringe and uncomfortable in the scenes

Overall my opinion for this shows would be 4.5 because of the acting and the role play how great their performances was really outstanding and full on energy. I think i would recommend for kids,family and even schools as well, they can enjoy both the character and learn someone the story at the same rather then watch one character only. By far it is the excellent show event. 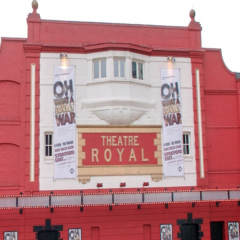 The Rapunzel at the Royal Stratford Theatre

I went to a event show called The Rapunzel.