Shakespeare’s Mad Women takes the premise of an abstract form of afterlife, for all of the ‘mad’ women from Shakespeare’s works; namely, those who’ve committed suicide. During the piece, Ophelia and Lady Macbeth welcome a Juliet hysterical for her Romeo.

From the beginning, I knew I’d enjoy this piece. From the small, intimate venue, to the sharp, literary, feminist crowd it attracted, all signs pointed to an intelligently satirical look into Shakespearean tropes. Needless to say, I was not disappointed.

The first choice that landed perfectly was that of setting it in modern-day speech, costume and all. The informal tone this brought could, upon first glance, indicate a more relaxed, mindless performance, but it in fact served perfectly in keeping the audience engaged and entertained. The intensity remained similarly unchanged; the (cleverly sporadic) dramatic climaxes were powerful to say the least, but this was balanced out by the sharp, conversational banter of the rest of the piece.

Physical theatre, whilst a common method among such experimental pieces, is notoriously hard to nail - but here, the perfect synchronicity with which it was executed left no room for clunkiness, and kept the audience totally engaged. Usage of this exaggerated action grew in a crescendo until the final scenes, which then became a frenzy of intense, symbolic movement. Following this, the ending itself was somewhat an anticlimax in terms of drama – but I can’t deny that the ironic humorous get-out was delivered with beautiful dryness. It definitely elicited appreciative laughs from much of the audience (including myself), as did the rest of the humour throughout.

In terms of the plot itself, I don’t think I’ve ever seen a similar take. The originality and novelty of the plot left it hugely entertaining. Whilst the role of women in Shakespeare’s texts is a common debate in literary spheres, this piece was based in a fascinating context which gave it a lasting edge. As the women philosophically analysed their place in their respective plays (in an equally abstract context), there was no time to be bored – every facet of the piece gave way to food for thought.

Because the piece was so filled with social, ethical, and philosophical conceptual stimulation, the resulting plot became a little obscure. The eagerness to feature each and every possible idea (whilst it certainly left the audience entertained and with plenty to think about) made the whole thing feel a little unfinished, which the ‘jokey’ escape from explanation at the end wouldn’t have helped. Roughness around the edges is to be expected, but I thought that perhaps the introduction of so many different themes was just slightly too ambitious. Nonetheless, it’s far better to be inundated with ideas than to be lacking, and this overt elaborateness only became a hindrance toward the end of the piece.

Overall, though, this piece was inarguably enjoyable, and certainly not to only an intellectual elite crowd, which I was afraid would be the case. The humorous approach makes it totally accessible, and brings lightheartedness (though combined with flawless intensity) to what is usually a tempestuous topic. 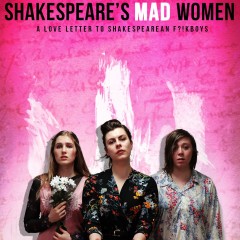