Voice MagReviewsDrunk With a Pen

Cosy, simple Sweet Werks is the sort of venue that Fringe theatre was made for, and Joseph J. Clark’s show ‘Drunk with a Pen’, fits in here like a cork in a bottle.

I felt I’d popped into a friend’s living room for an hour, half expecting to be offered a cup of tea, or perhaps more fittingly, a beer. Clark and his support act, Rachel Shorer, were sat supportively amongst the audience for the duration of each other’s sets, Clark mid-pint, ensuring vibes were suitably chilled. His welcome and first poem set the tone for the evening; an exploration into the highs and lows of the famous best friend and infamous worst nightmare; alcohol.

Rachel Shorer, whipping off uncomfortable shoes, nattered to the audience like she’d known us for decades, encouraging us to make a bit of a racket if we liked, as it was Friday night and this wasn’t going to be like ‘poetry at school’. Shorer performed several extracts from her show ‘10 Mistakes Every Girl Makes in Her Twenties’ with charisma and focus. Her impressive ability to portray such feeling through beautifully uncomplicated words, combined with her evident skill for performance was refreshing. Particularly touching was a piece on her short-lived teaching career, the re-lived dilemma and inner creative torment reaching out from her to the second row and tapping me on the shoulder.

Joseph J. Clark’s return to the stage to continue on his journey of 13.5 poems provided an interesting difference in style; winding and colliding poetry and introductions, the audience happily unsure of which was which. At times, I found Clark’s delivery a little rushed, sadly not always backed up by vocal clarity, and as a result some of his carefully chosen words were lost, even at close range. This was a shame as the majority of what I did hear was wonderful. Alongside some whimsical shorts based on cocktail recipes and drunken tomfoolery, Clark bravely tackles the subject of alcoholism; not just his personal connections to this, but also in reference to community and wider society. I found these poems to be the most engaging of the evening. They were performed with poignancy and in moving detail, doing the spoken word genre proud by saying the unsaid. The what-if’s, the should-have’s and the wish-I-could’s.

Attention towards the end of the show turned to salutations of all things boozy. Discussion on the positive effect of dutch courage in performance and feeling ‘liberated by libations’, was coupled by a fantastic alliterative quick-paced listing, complete with an amusing stumbling impersonation to finish.

Joseph J. Clark’s ‘pub crawl of poems’ analogy was indeed what he set out for it to be; a simultaneous condemnation and celebration of the effects of drinking, starting pleasantly, getting a bit weepy in the middle and ending up joyfully singing to a lamp post. Now, for some reason I really fancy a pint…I’m off to the pub. 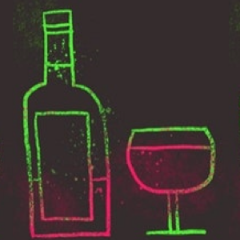 Drunk With a Pen

Cosy, simple Sweet Werks is the sort of venue that Fringe theatre was made for, and Joseph J. Clark’s show ‘Drunk with a Pen’, fits in here like a cork in a bottle.