Voice MagReviewsWhat We Leave Behind

When someone dies, we are left with a museum all about them, normally in the form of boxes in a loft. But what do we leave behind?

Erin Bolen's piece entitled 'What We Leave Behind' left everyone in the audience with tears in their eyes as her spoken word poetry explores the contents of a loft and an almost eulogy at the audience's funeral. The stage was split into two sections and the performance switched between the two areas. On one side, a pile of cardboard boxes, the attic of Erin's father who passed. On the other, a table with tissues, flowers, a microphone and a picture frame saying 'your face here' - a funeral set up for the audience.

Erin was really good at portraying the heartache that comes with grief without bursting into tears, as would have been easy to do. She was subtle and sincere in the way she performed the poetry. The words she chooses were beautiful and express all the thoughts and feelings a person dealing with a loss would experience, including the funny side of things like the jokes from when the person was alive. She also makes light about some of the music and food choices made for funerals and wakes. These jokes provide moments of catharsis, definitely needed given the upsetting theme of the piece.

I think she was very bold in the way she tackled such a taboo topic and poured her heart out on stage. Everyone experiences grief at one point or another, and it's important that we have conversations about death and loss. During the piece, she jokes about some of the top music choices for funerals and comments about how if you don't make it known what songs you may want, you'll be stuck with something very odd, emphasising the importance of discussion in a humorous way.

Erin enlisted the help of Sam Lunn, who throughout the piece gently and beautifully played acoustic guitar. His performance was mesmerising to the audience, and many of those who weren't already tearing up, did so as he played.

Overall, What We Leave Behind is a moving piece of theatre exploring the things in the loft and giving an insight into what you, as the audience, may leave behind. Erin creates discussions about the unspoken and also breaks your heart a little. She is honest and captivating, and that is what I think we all need sometimes. 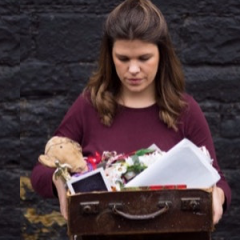 What We Leave Behind

When someone dies, we are left with a museum all about them, normally in the form of boxes in a loft. But what do we leave behind? 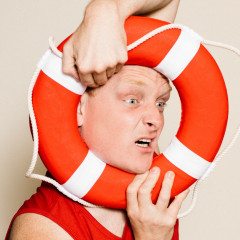