The Marlborough Theatre & Bar was the venue for tonight’s performance. It’s a historically significant building with an all-inclusive attitude thanks to their strong ties to the LGBTQ+ community. Upon arrival I was provided a stamp so I can re-enter the building, and a leaflet detailing the shows.After chilling out for a bit and enjoying the atmosphere, we were invited upstairs to the theatre.

Upon entering, our female protagonist Nicole Henriksen already on stage, playing a ukulele, wearing a foil robot head dressed only in her undergarments and socks. The stage was simply set with a whiteboard, a carpet and a few pieces of A3 paper.

The show was split into five sections; Intro, Family, Art, Love and Outro. - To make it super clear for us, Nicole even had a visual cue on the board - “just in case people were lost”.

Although perhaps self-explanatory, I’ll run you briefly through each section. The intro introduced Nicole and where her troubles began with anxiety. Family told us about Nicole’s school friend and how the friend was brought down due to her bipolar disorder. Art was about how Nicole discovered her enjoyment  of music (Fall Out Boys) and paintings (Vincent Van Gogh). Love was about her discovery of theatre, and how her first show was received by audiences. Finally, Outro was the ending of the show and her final message for the audience: no matter what happens, accept yourself as you are.

The start of the show and the end of the show was a sing-along, bringing a circular structure to the performance. Fluent and fluid, the show never dragged on.

The show itself was very hilarious, but wasn’t without a few sad moments and truly heartwarming parts too - which made me understand Nicole and her life with anxiety.

Overall, I very much enjoyed every second and I recommend it to those who want a good laugh and those who wish to know that they’re not alone. 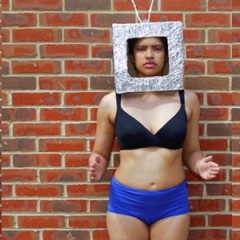 A Robot in Human Skin