They come looking for a cure, many never leave alive...

Set in Olalla, Washington State in 1910, Fast, by Kate Barton, explores the realities of Linda Hazzard's Sanitarium where patients 'fast'with the aim to 'cure' disease. This piece focuses on two English patients Claire Williamson (Stephanie James) and Dora Williamson (Anya Williams) who come in with a red, sore eye and a 'tilted uterus', aiming to be cured through Dr Hazzard's fasting techniques.

This piece felt like it had a slight 'Black Mirror' vibe, minus the sci-fi, as the audience wonder how far Claire and Dora are willing to go to find a cure. The piece is classed as a 'dark, psychological drama' and it is very suiting. Caroline Lawrie's portrayal of Dr Linda Hazzard was intriguing, creepy and most definitely heart-wrenching. It was difficult to look away. My only critique about the acting was that occasionally the delivery was a bit fast (pun not intended).

I did, however, find the seating arrangement quite awkward for the Purple Playhouse Theatre where it was performed. There was thrust seating but there were only two, very close together rows. The show was sold out and so it was a very tight fit. Also, the set from where I was sat was very difficult to see. There are two beds, for example, and the characters in them are facing away from the audience and so I felt like some of the characterisations was missing, or at least hard to see.

Despite this, the piece utilised the space available with reasonable success, using projections to set the scene and taking advantage of the shadows that are created through this. The lighting was dark and eerie, and the storyline was captivating. The technical aspects to this performance were equally as impressive to me as the intense and precise acting. There were moments of humour which provided catharsis and much needed levity, particularly through Sean Patterson's character, and yet sombre moments to remind the audience that this was indeed a reality.

Overall, I was very impressed by the technicalities and the acting, however the layout of the venue and the staging could have been improved. But, as I left wanting to find out more about the life of Dr Hazzard and her real-life sanitarium, it is safe to say Digital Drama really do achieve their intentions with Fast. 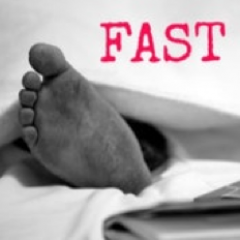 They come looking for a cure, many never leave alive...