A thought-provoking piece challenging the facelessness of the refugee crisis

‘The Sleeper’ follows the story of a woman travelling overnight on a transnational train journey, who finds a refugee lying in her bed upon entering her cabin.

This is not your typical refugee story. There’s a tendency in theatre, TV and film in recent years to employ a storyline centring around the refugee crisis, self-indulgently believing that they’ve made a difference. That is precisely the reason why I began this show with a wary eye, but why I was extremely pleasantly surprised by the scope in outlook which developed towards the end.

The main thing that made this show stand out was the extremely meta narrative twist before it began to conclude. The actress playing the refugee turned to directly address the audience, breaking character, and proceeded to question the integrity of the show itself. This turned into a debate with the other (also character-broken) actors, resulting in a shift in direction and prompting a change in the audience’s direction of thought. Political shows such as these are often far too self-important to be fully enjoyed, but the blunt discussion and tongue-in-cheek humour used here really lifted the impact of the whole performance.

The style also cleverly adapted throughout the piece; physical theatre was much more of a prominent feature in the final scene, and this made for an effective visual exploration of the main themes (which seemed to mainly centre around power and control). Here, though, some metaphor did seem to be lost to obscurity; for example, the smashing of a flower-pot (whilst I have no doubt it had symbolic meaning) was slightly too random and unexplained to be properly effective. Nevertheless, I’m equally sure that the symbolism might have struck with some others- it just needed a slightly more explained context.

The few criticisms I have are minor indeed compared to the quality of the show’s strengths. For one, it did start slow; a pitch-black opening served well to set a tense scene brimming with foreboding, but it extended for just slightly too long, which diluted the effect. This issue with pacing continued on occasion, some scenes introduced far too fleetingly and others given too much attention. Another brief issue was in the music used to connect scenes; it was slightly clunky and ill-fitting, and did interrupt the flow and tension of the piece on several occasions- but not enough to impact anybody’s engagement.

Ultimately, though, I would definitely recommend this show to anyone who may have the chance to see it. It has a rare degree of self-awareness where other similarly political shows instead can’t resist smug self-indulgence, and will definitely inspire thought and conversation whilst remaining inarguably entertaining. 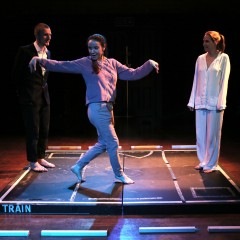 A thought-provoking piece challenging the facelessness of the refugee crisis