As the pun in the title suggests, Struan Logan’s debut hour of stand up is a hilarious and smart retelling of his travelling tales.

Backpacking and travelling around the world is a natural stimulus for an array of experiences and anecdotes for anyone, and Struan Logan is certainly not in short supply of entertaining stories in his latest show at Brighton Fringe. Based on his experiences traveling around Australia, New Zealand and South East Asia, this stand up show effectively captures both the exciting and mundane realities; from being an object of fascination to Buddhist monks in Myanmar to the problems with hostels.

From the beginning of the show, Logan’s strength with crowd work is apparent, and becomes one of the successfully unique elements to his stand up. Abandoning showbiz formality, he acclimatises his crowd with ease, encouraging us to introduce ourselves and actively participate or comment on the material being presented to us. It is certainly evident that he cares about his audience and the experience they are having, which translates into a thoroughly engaging and enjoyable set.

His opening material, whilst based around classic stand up topics of the etymology of his Scottish name and living in London, manages to remain refreshing due to his individual and unexpected patter. Learning about a regular from Hull at the bar he worked at, who happened to be a tourist salesman for North Korea, brought a bizarre hilarity to an anecdote of the trials of living off a minimum wage job in one of the world’s most expensive cities.

Logan manages to quickly and smoothly segue from testing the comedic waters of the crowd into his main material on travel, which retains its bizarre and unique humour. From lamenting the troubles of sleeping in hostels as a snorer, to working in Australia and discovering the beauty of five-dollar domino’s pizza, he authentically captures the trials and triumphs of travelling and trying to expand as a comic in completely foreign countries. His travel anecdotes are particularly well prepared and structured. Every story, not matter how small, ties in seamlessly with his other material, and he manages to successfully incorporate audience interaction and improvise new anecdotes without losing direction or momentum. Whilst occasionally losing himself in commenting on audience reactions, for the most part he maintained his persona as a truly authentic comedian with a true passion for the stories he delivered.

A highly candid comedic voice, this newcomer to Brighton Fringe is certainly one to put on the list for a relaxed and entertaining hour of interesting and personalised comedy. 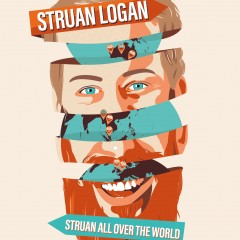 Struan Logan: Struan All Over the World Review

As the pun in the title suggests, Struan Logan’s debut hour of stand up is a hilarious and smart retelling of his travelling tales.