The Warren delivers again - in an interesting way.

I have always been a fan of The Warren as a venue - seeing a number of high quality shows in previous Fringe's. My first show of the year - Form - was no exception, performing in the slightly stuffy venue The Hat.

Upon entering the venue, two things (excluding the warmth) stood out to me. First, a single black curtain which stood out from the backdrop - which could be the actor/prop curtain. Secondly, on the surprisingly small stage, there were a few cardboard boxes and a table full of contents which looked like plastic bags.

What immediately makes Form stand out from other theatre pieces is that the whole story was told only using the aforementioned cardboard boxes, three actors and a whole lot of paper balls - 20,000 paper balls in fact! There was also a single red paper ball, which sent our protagonist on an adventure of discovery and reflection. There was a striking contrast between the red ball, and the boring office papers.

From offices, to boats, to sea, to land, then to jail, then back to the office, the adventure offered both emotional and humorous parts, including when our protagonist found themselves swimming in the sea. The whole show is completely non-verbal, so the three actors had to convey everything through physicality, something they do very successfully. The conclusion enforces some important lessons about life.

It certainly was an interesting way to portray such a powerful message using only paper, but if the idea came from paper, then it makes sense.

Apart from the stuffiness - which was beyond their control - and the audience's quiet reaction to some of the humorous bits, I thought the show was great. I understood the story all the way through and and this show used no dialogue, it’s a breath of fresh air to see how body movements, sound effects and music made the story come to life.

Overall, this was a very interesting play and I recommend it to those who like to see just how paper can bring performances to life. 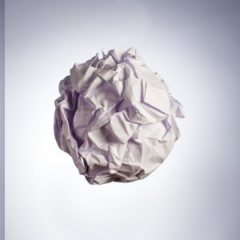 The Warren delivers again - in an interesting way.