In the unlikely event you read my review of Late Night Gimp Fight when they performed in Edinburgh, you'll know that I absolutely loved them. In fact, I even chose them as one of my Pick of the Fringe shows, so it is no exaggeration to say that I was a more than a little excited to see the show again. My team were already annoyed with me humming Lukas Graham - the shows' opening number.

Unfortunately that first song was ruined somewhat by both the generator keeping the inflatable venue erect, and the terrible audio mixing that resulted in the backing track drowning out the vocals. It was a shame, but I was willing to overlook it, as I thought my prior knowledge of the material would prompt hilarious recollection.

However, the audio problems persisted throughout, with entire sketches being drowned out by the ambience noise and mic issues, and the physicality of the sketches was not enough to keep the performance afloat.

With Matt Ralph ill with pneumonia, the gimps were already gimped by having to rework sketches so his absence isn't noticed. This worked mostly successfully, although there was one instance where they forgot what came next because Matt was the one who would set it off.

Delivering most of the same sketches as in Edinburgh, the show should have been a success, but this time it felt somewhat flat. The audience members directly beside and behind me chuckled politely, more than the raucous applause of EdFringe, and in the middle had the audacity to start a conversation.

I must confess I was more than a little disappointed.  Perhaps it was my fault for having such high expectations, but it certainly felt like the gimps were somewhat uncomfortable on the stage, rushing through the sketches rather than enjoying them.

I know how good the Gimps can be, but in this instance they really weren't at that level. 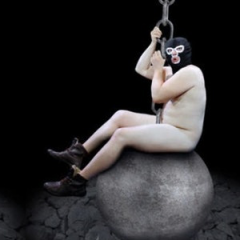