If you kill someone, you better make sure they really are dead. First rule of a murder, isn't it?

GUN is a one-man multi-character comedy Western, following the tale of Roscoe Porter who is seeking to avenge his brother, avoid a mysterious murderer and put an end to a diabolical villain.

Performed by William Hartley (of sketch group Clever Peter), GUN played on plenty of Western troupes with reasonable success, and he certainly looked the part of a cowboy down on his luck.

The set was minimal, but used creatively with some hilarious results. Reusing props for different scenes worked a lot better than you might imagine, and the Sheriff's standoff was a particular highlight, illustrated to the audience with playing cards. Genius.

The show did not have the strongest of starts, with jokes that felt trite, and voices that were hard to distinguish from one another - I actually thought Hartley only had the one voice! Trying desperately not to look at my watch, I settled in for a long hour, but was punished for my presumption as Hartley got into the groove and whipped himself and the audience up into a frenzy, changing characters with increasing pace and conviction.

The performance was certainly energetic. In fact, I would almost describe it as frantic, and while we as the audience were more than willing to get lost in that chaotic energy, there were times where the hurried nature started to be a detriment. Words got jumbled, lines were botched and voices sometimes didn't match the character who were meant to be talking.

Nonetheless, once Hartley found his stride there was no stopping him, not that any of us wanted to. We were lost in the narrative, truly transported to this cliche Western world, and collectively laughing and squirming as we watch perhaps one of the most gratuitous sex scenes ever witnessed - don't forget this is a one person show! 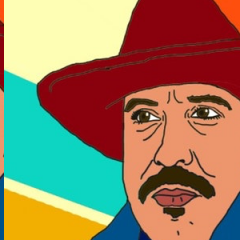 If you kill someone, you better make sure they really are dead. First rule of a murder, isn't it?