Wes Anderson delivers nothing short of a masterful, heartfelt visual delight with his new stop-motion tale.

Although I tried to go into the cinema with an objective, clear lens with which to watch this film, it proved impossible – it seemed everyone on the internet wanted to put in their penny’s worth. Following the endless tweets, I was expecting an aloof, hipster-artistic work laced with cultural appropriation, and I couldn’t have been more pleasantly surprised. I’m going to refrain from spoilers for obvious reasons, but the first thing that has to be established is that this film is, in plain terms, well worth the watch. Take your kids, your partner, your friends – it’s one of those rare gems that fits all.

The main thing that sets this film apart so distinctively is, of course, the art style. The whole film is shot in stop-motion; Anderson’s Japanese dystopia feels lovingly handcrafted, with an attention to detail almost as sharp and flawless as the stop-motion itself. The whole feature really is a visual feast, with snippets of almost self-indulgent variation dotted throughout. For one, the fight scenes are pleasingly retro; an opaque, comic-style cloud of dust, with limbs thrashing from all angles. On the little screens of TVs, simplistic old-school animation stands cleanly against the soft stop-motion foreground. It really is a masterclass in cinematography, and the plot certainly does its equal part in lifting the film to brilliance.

Whilst the visuals provide an objectively pleasant basis, the plot is where Anderson’s signature arch tone is allowed to shine through. When looked at more critically, the setting is fairly dark - a Japanese dystopian land, politically disenfranchised young protagonists, with man’s best friend banished to a place so grim it lands itself the label ‘Trash Island’ - but he cleverly employs a classic ‘dog-human team’ trope as to keep the tone acceptably light-hearted. One classic role that’s been reversed is the language barrier between audience and character. Whilst, usually, it’s the animals who are unintelligible, this time it’s the humans disconnected from their largely English-speaking audience. This doesn’t create any issues plot-wise, naturally with clever navigation to avoid any confusion, but it does create a warmer, stronger affinity with the protagonist dogs in the film, because (of course speaking generally) the audience aren’t able to relate to their human counterparts.

One of the only complaints that I would proffer is that the lines between cultural appropriation and appreciation are almost uncomfortably blurred. Artistic choices are often questionable by their nature, but it seems that some potentially problematic aspects of this film could have been avoidable had they been considered more holistically. For example, the aforementioned language choices could, of course, be seen as simply an admirable nod to Japanese culture. However, it’s understandable why Japanese viewers might find it contentious. The heroic, friendly protagonist dogs speak English, whereas the largely evil human race trying to banish them speak solely Japanese. Another example is the employment of an American exchange student, Tracy Walker, as the hero heading up the resistance rather than one of her Japanese classmates, who should theoretically have had the voice in a film using their own culture. All in all, it’s really difficult to assess whether or not these culminate to be problematic. I think it largely depends on the interpretation of the individual, but the widespread debate is understandable at the very least.

This is definitely a film I would recommend! As I’ve said before (and will undoubtedly say again), it really is for everyone. There’s an almost childlike joy, and clear passion, behind the cinematographic choices, and these combine beautifully with a classic (yet refreshing) plot to deliver a warm (yet sharp) masterpiece. 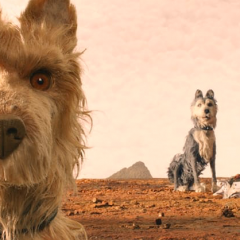 Wes Anderson delivers nothing short of a masterful, heartfelt visual delight with his new stop-motion tale.