A highly experimental and innovative dystopian

Nicola Barker's dystopian is pulled from the same realms of sci-fi as Black Mirror, presenting us with a terrifying future in which people are subject to constant surveillance of their language to ensure they submit to the ideals which they are told will make them 'H(A)PPY'.

Barker breaks every rule in the book - and actually reinvents the novel form. The tale is highly experimental which sections written as the 'stream' of Mira A - the document reflecting and monitoring Mira's 'narrative' with visual markers from the negative 'pinkening' of words to the chaos that ensues as Mira's 'osciallating' reaches a climax, producing pages of phrases repeated in desperation, or symbols embedded in her narrative. Barker's subversion of typography is an interesting exploration of the novel as a material object in a world which is going increasingly digital, with audiobooks soaring in popularity. In H(A)PPY it is not just about the words on the page but how we see them which is hugely important to the way the narrative pans out.

The general principle of this new society follows in the same vein as most dystopian novels - from 1984 to The Circle, with Mira indoctrinated to a philosophy which tells her that the past was corrupt and destructive and that in the new communal society, happiness is found in a strict regiment of living. However, we see this from a totally new perspective which at once embraces and reacts to technology. The novel challenges the paradox Mira is stuck in - having to learn instruments and create music without being able to draw from the past, the constant recording of language while the creation of a narrative is banned.

This book is confusing and mindboggling, but it is also strangely easy to read and grasp. It is a fun exploration of what happiness is, and what a world of mindfulness, balance and always turning away with no extreme of emotion looks like. Linguistically it is incredibly clever and this book will likely pave the future for innovations in the novel. 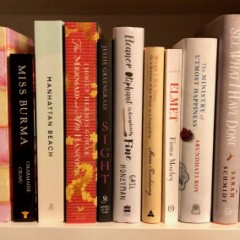 A highly experimental and innovative dystopian