Jesmyn Ward's 'southern odyssey' is a top contender for this year's Women's Prize.

Sing Unburied Sing has been described as a 'Southern Odyssey' and it certainly lives up to this. While it only spans days in real time, it covers years of racial tensions, poverty and struggle in the rural American South.

The story is told from multiple perspectives - largely 13 year old Jojo and his mother Leonie - who is addicted to cocaine, and a neglectful mother. Jojo and his sister Kayla, are mixed race, with a black mother and white father, and as such have been disowned by his father's white family, instead primarily cared for by their 'Pop', Leonie's father. An excursion to pick up Michael, the children's father, upon his release from prison is a harrowing journey through the lives they live and struggle through. The multiple perspectives, alongside elements of magical realism, captures the lack of communication and understanding between characters, which drives much of the tension and frustration of the narrative.

The story is truly tense, as it feels throughout as though the family is about to implode. Jojo's narrative is deeply moving, and often difficult, and while Leonie's is far less sympathetic, it does give insight into her experiences and how she struggles to relate to and connect with her own children. There are stark and horrific moments, in everyday tasks as well as the horrendous injustices the family face. However, there are also, very momentarily, deeply beautiful moments, between Jojo and his sister, or with his Pop. The setting is completely immersive - you can almost feel the oppressive heat and imagine the many smells of the novel filling your nostrils. The magical realism is captured so seamlessly that it doesn't feel odd or out of place, but perfectly fits with the themes the narrative has gradually established.

Ward captures the intensity of human emotion in the smallest of actions and incidences, in the same way that the family becomes a microcosm for Southern society - with the relationships between the black and white families, and the history between them reflecting larger tensions and discrimination. The book is difficult and complex, as well as full of sorrow, but it is not completely bleak with a sense of hope in the characters of Jojo and Kayla, as well as a pure good-heartedness in Pop.

This book is truly stunning and it will be a big one this year. 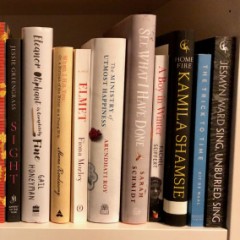 Jesmyn Ward's 'southern odyssey' is a top contender for this year's Women's Prize.